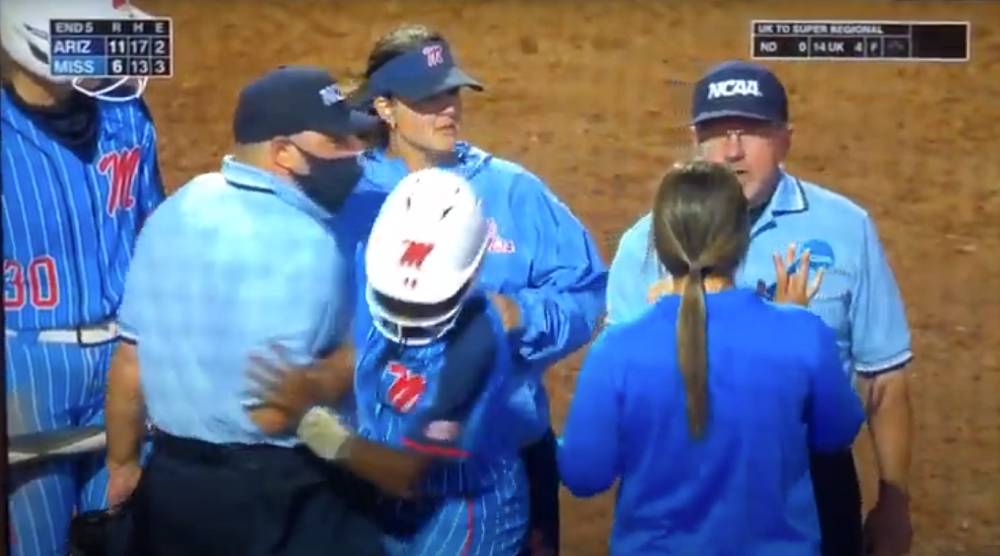 Some dramatics unfolded late Sunday night in Tucson, Arizona. In the latter innings of Arizona’s eventual 12-6 win over Ole Miss, a series of events culminated in an Ole Miss player shoving an umpire.

How it Unfolded
The situation unfolded as Ole Miss batted in the home half of the fifth inning. Arizona had scored eleven consecutive runs over the previous two innings, including eight in the top half of the fifth, and held an 11-6 lead in the game.

Ole Miss outfielder Nyomi Jones led off the inning with an infield single. An out and two consecutive singles followed, which loaded the bases. Senior catcher Autumn Gillespie batted with the bases loaded and one out.

Facing a 1-2 count, a noticeably-determined Gillespie watched a pitch at or near the outside corner of the plate. No “K-zone” was in place on the game broadcast, but the pitch was called as strike three to retire Gillespie for the second out of the inning. Initially unaware of the umpire’s call, Gillespie spoke to the umpire as she walked back to the dugout and pointed her bat at him at one point.

Abbey Latham, a true senior, followed Gillespie in the lineup. The first pitch was a called strike on the inside part of the plate; Latham expressed visible displeasure with the call.

The Shove
After a moment, home plate umpire Bobby DeMayo instructed Latham to step into the batter’s box; a television replay appeared to show DeMayo speaking to Latham, in addition to clapping his hands and pointing at the batter’s box.

Latham did not immediately step into the box; DeMayo stepped out from behind the plate, called time, and gave the signal of “out” after pointing at Latham.

Ole Miss head coach Jamie Trachsel, coaching in the third-base coaches box, and assistant coach Katie Rietkovich-Browder both converged on the plate, protesting DeMayo’s call. Third-base umpire Mark Craver also participated in the meeting. While the two coaches and two umpires discussed the call, Nyomi Jones jogged in from third, appearing to be headed to the dugout as Latham would be the third out of the inning.

As she reached the plate, Jones maneuvered between the coaches and umpires, making contact with DeMayo that appeared to be incidental. Continuing her motion, however, Jones shoved DeMayo by the arm with both of her hands as she continued past him.

Immediately Following
Trachsel reacted to Jones’ shove more than even DeMayo himself, as the umpire did not seem to immediately consciously realize what had happened.

The delay of game was clarified to be a strike on Latham, making it an 0-2 count, and Jones went back to third base as the runner. She was not on the base long, however, before Trachsel made a substitution and removed Jones from the game in favor of pinch runner Maddi Banks.