Debuting on July 22nd, the 2020 Upper Deck Goodwin Champions set features fifty individuals, including athletes and other media personalities. Tiger Woods, Alex Morgan, Ben Simmons, and Wayne Gretzky are among those also featured; Wisz is the only softball player to be included in this year’s edition of the product. 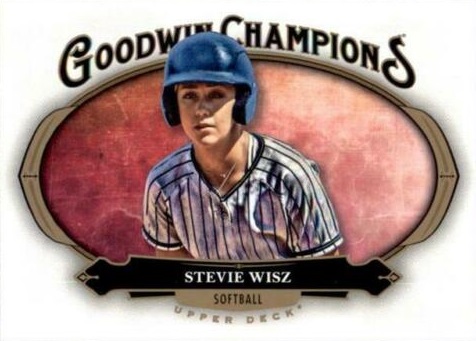 The Goodwin Champions release depicts a diverse representation of athletes and various celebrities. Each featured person has two cards in the base set, including both horizontal and vertical photographs. The set also features autographed cards, as well as memorabilia cards.

According to the product’s checklist, as released by Upper Deck, Wisz is featured with three variations of autographed cards, including two that include custom inscriptions “2019 Softball National Champs” or “Go Bruins.”

One of seven seniors on the 2019 UCLA squad that won the Women’s College World Series title, Wisz’ story goes far behind the playing field. Diagnosed at age 1 with aortic stenosis, she underwent open-heart surgery at age 9 and again at age 15 in order to treat the problem. In January of 2019, doctors told Wisz that she would need another open-heart surgery, but she elected to postpone the procedure until after her senior season at UCLA in order to graduate with her degree and help the Bruins reach their goal of a national title for the first time in a decade.