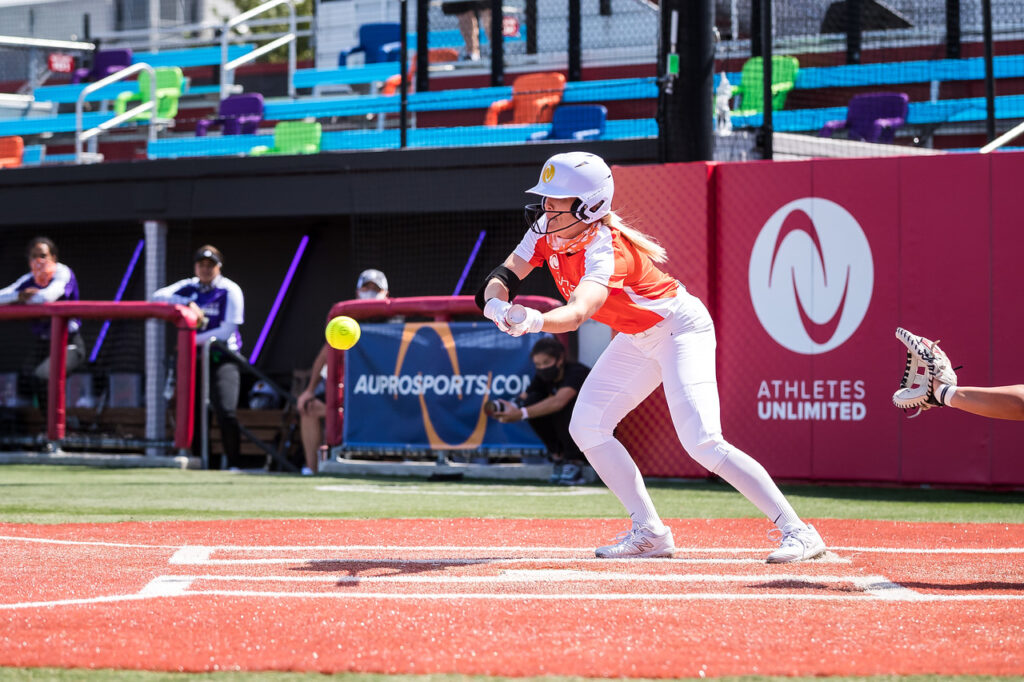 Following their successful opening weekend, Athletes Unlimited on Tuesday evening staged the draft for the league’s upcoming second week of play. One of the cornerstone hallmarks of the upstart league, a new draft is held each week of the AU season, with team captains determined based on points earned during the previous week’s play.

Tuesday’s draft was unique in that it was the first draft held with captains determined from actual regular-season play; the previous captains, who led for the opening weekend’s games, were selected based on play in pre-season scrimmages. Cat Osterman, the week 1 overall points leader, had the 1st pick on Tuesday night; she was followed by fellow captains Samantha Show, Victoria Hayward, and Aleshia Ocasio.

Broadcast on Facebook Live, the draft peaked with approximately 980 viewers at its highest point during the live-stream. Viewership consistently held steady within the range of 860-880 watchers. A full listing of the Week 2 team rosters can be found here.

Some thoughts following the Week 2 draft…

1. Quality pitching is at a premium in Athletes Unlimited
There are thirteen players in the AU talent pool who list pitcher as their primary position. Others – see Pendley, Shelby – have collegiate pitching experience, but despite the depth at the position, quality pitching is already the most coveted asset in the league. Three of this week’s four captains were pitchers, underscoring both the value of quality pitching and what solid performance in the circle can accomplish under the league’s point system. Despite being a pitcher herself, Samantha Show chose former Michigan great Haylie Wagner as her first draft pick, prioritizing a solid rotation from the start. Victoria Hayward, the only non-pitcher who earned a captain’s chair this week, chose Danielle O’Toole with her inaugural pick, ensuring that all of the early-season pitching aces were off the board within the first few selections.

2. Morgan Howe might be the most underrated player in Rosemont
The former Arizona State outfielder and current Florida graduate manager was one of the late additions to the Athletes Unlimited player pool. She played in each of her team’s three games, earning a .400 batting average and recording two RBIs. Howe’s batting average ranked 14th league-wide for the opening week’s games, and she finished the week 21st in the points standings. Despite her solid showing, Howe fell to the 11th round of the draft, and was the fourth outfielder to join Team Hayward (including the team captain herself). Keep an eye on Howe, as she hasn’t yet gotten to display the pop in her bat that was clear and ever-present during her collegiate playing days.

3. Don’t overlook the late-round picks
Somebody is always going to be drafted in the last round, even from a pool of players like Athletes Unlimited has assembled. This week, though, the players who fell to the final two rounds could make some serious noise on their new teams. Canadian pitcher and Oregon alum Karissa Hovinga was Team Osterman’s second-to-last pick; Hovinga had multiple instances of mop-up duty on the blue team during week one of play, and she was effective when given an opportunity to get into a groove. The only 2020 graduate in the league, Florida alum Jordan Roberts, also fell to the 13th round; in her first-ever professional at-bat, Roberts cranked a no-doubt solo home run, so keep an eye on her powerful bat this week. Other late-round picks that could prove to be steals were Joey Lye, still a speedster at age 33, and Missouri alum Emily Crane.

4. Credit where it’s due: Cheri Kempf is a good draft host
I’ve been critical of Kempf in the past in her role as commissioner of the NPF, but in the interest of giving credit where it’s due, she has done a quality job of hosting the Athletes Unlimited draft in each of the first two weeks of the league season. Now an executive within AU’s softball structure, Kempf took on an anchor/sideline reporter-hybrid role for the drafts, providing commentary to fill time between picks and anchoring the flow of the draft broadcast. She’s no stranger to a microphone thanks to her days as a television color commentator, and she seems more relaxed and energized in this new role; both traits reflected extremely positively to the general viewer.