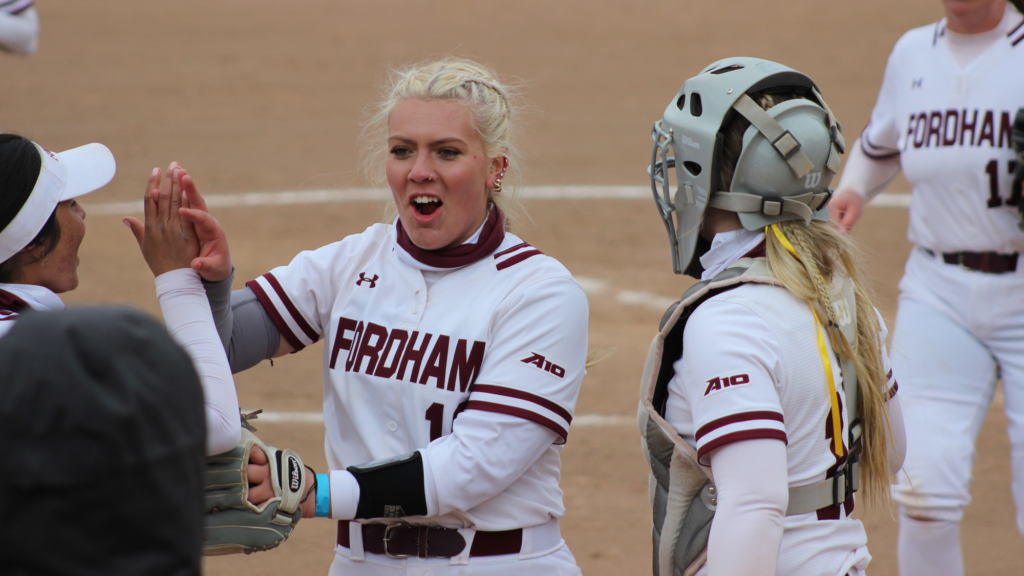 During a series against La Salle in early April, Miller threw back-to-back perfect games in consecutive outings. She is just the second player in Fordham program history to throw multiple perfect games in a career.

“Over that last week [before the La Salle series], I had a lot of personal goals for myself,” Miller said after her history-making weekend. “Throughout that week, I was working extra hard and I had a kind-of ‘no limits’ mentality… I wanted to go out there and show everybody what I could do.”

Miller’s competitive mission to show what she was made of paid off; in addition to achieving perfection, she collected dual 12-strikeout performances in the games and moved her season’s strikeout total to 61.

Early in the season, a pair of games included missteps that led to unpreferred outcomes. Once those games were in the books, though, Miller said that she actually benefitted from the poor showings in the long run.

“After the St. John’s game, I wasn’t feeling very comfortable and I was also at a point where I was trusting my pitches, but I was being a bit jumpy,” Miller recalled. “I was trying too hard and just missing, and I wasn’t pounding the zone as much as I normally do. And that was another point to be able to learn from. Since those two games, though, putting them together and all, I realized what I had to work on and what I had to do to be able to be the most successful that I can be. That really, I think, put me in a groove and I’ve felt great ever since then! Now, I just keep pounding the zone and racking up the strikeouts. I’m not *looking* to throw a no-hitter or a perfect game… I want to get outs.”

Reflecting on her achievement and the consecutive perfect games, Miller harkened back to how she, along with her coaches, made some adaptations in preparation ahead of this season.

“I think I got some good experience in being on the team last year,” Miller noted. “The only thing that’s really different for me is that I had still not played any conference games before this year. And coaches and teams have my scouting report, but we haven’t played them, so they haven’t seen my pitching. [My coach and I] did some offseason work on my pitching, just to always improve and get better, and I think that really helped me out. My freshman year, I was successful with my pitches and all, but sometimes by the end of the game, I would be getting beat up. So we worked on when to pound the zone, things like that. And now we have a plan; one of those ‘it’s different, so don’t worry’ kinds of things.”

So in the zone was Miller during her initial perfect game that she didn’t realize what she had accomplished until after the game was over. “Maybe, maybe [a perfect game]was in the back of my mind for a split second in the third inning or so?” Miller said after some reflection, “but it’s not something that I was trying to accomplish or was really thinking about.”

The adrenaline really didn’t have time to wear off before the redshirt freshman’s next stellar performance, just one day later. This time, she was a bit more conscious of what was on the table. “For the first three innings [of the second game], I just wanted to go after batters, because I did it yesterday, so I want to be able to do it again,” Miller said, laughing as she recalled her midgame thought processes. “I didn’t know if I was even going to be throwing that day or not, but I was thinking to myself ‘oh gosh, the bar is pretty high from yesterday.’ It probably hit me in the fifth inning of the second game that I was on track for another perfect game. And I don’t want to say I got nervous, but the adrenaline was definitely pumping. I was almost seeing spots, I swear.”

Following such an impressive weekend of domination, it could be easy for a young player to coast on her laurels for a while. Don’t expect Miller to do that, though; she was ready to put her nose to the grindstone again right away. “As long as I have the same mentality that I have had, which is going into a game and really staying disciplined and focused on every pitch, that’s the goal,” Miller said. “Going out there and throwing a perfect game every time isn’t the goal. The goal is to get outs and to win.”