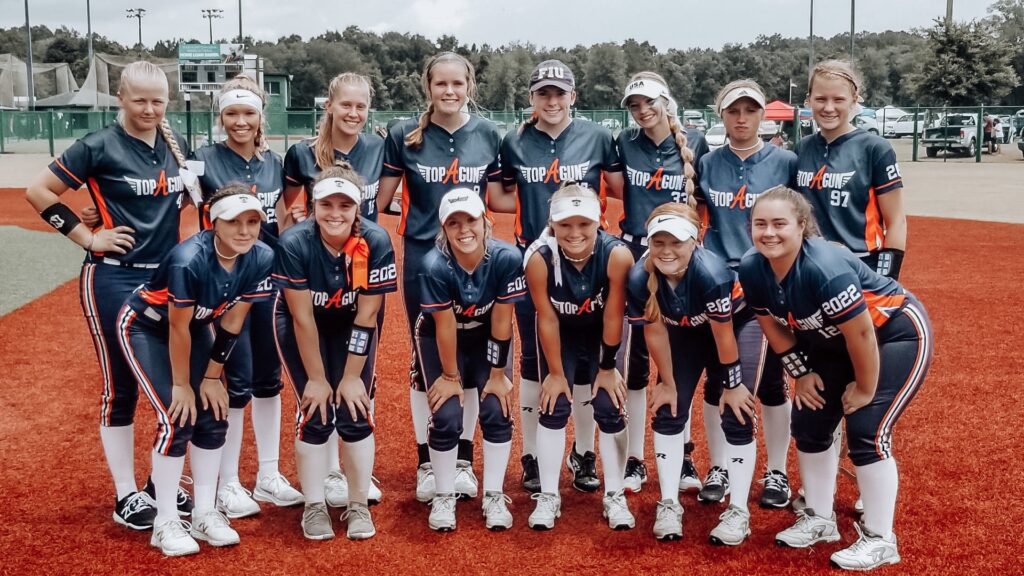 Premier Girls Fastpitch recently hosted their Independence Day Invitational in Newberry, FL. The tournament fielded 19 elite teams from across the country in the 16U division. Tournament director Jason Gusaeff did a great job running the tournament smoothly; despite the weather messing with the schedule. Here is a recap from the point of view of Top Gun 16 National, the runner-ups of the event. More in-depth stats can be found on their Twitter page (@TGA_Turner).

Pool Game 1: Top Gun National 11, Clearwater Lady Bombers 0
The bats were electric in the first of five pool play games, even after a lightning delayed the contest. 2021 LHP Kassie Rhodes (Stephen F. Austin State) and 2022 RHP Kathryn McChristy combined for the shutout and surrendered only three hits total. 2022 MIF Jaylee Wilson had three hits, including a double and a triple, and 2022 OF Elle Smith and 2022 OF Brittany Affolter each had two hits.

Pool Game 2: Top Gun National 0, GA Impact Gusaeff/O’Neil 1
Up next was the Georgia Impact Premier, who is a very well-coached and disciplined team. It was a pitcher’s duel from start to finish, and it was an intense game under the lights on Tuesday night. The Impact pitched 2022 Katelyn Cochran, who was one of the best pitchers observed in the 16U division. She spun the ball well, was very effective, had 14 strikeouts, and only gave up three hits in the complete game shutout; her rise ball dominated the game. She will likely be busy on September 1st! 2021 RHP Allison Benning (University of Oregon) countered with nine strikeouts, three hits, and no earned runs. Benning had a double and a single while 2022 C Bella Gerlach had a double.

Pool Game 3: Top Gun National 4, Tampa Mustangs Eve 8
Back again the next day, Top Gun faced a strong hitting team for their first of three games that day. The game was tied 4-4 in the third inning, but the Mustangs pulled ahead and Top Gun could not recover. Rhodes and 2021 LHP Makaela Carr (Florida International University) surrendered three earned runs. Wilson had a double and a RBI while Smith added a double and two RBIs.

Pool Game 4: Top Gun National 2, Beverly Bandits Helbling 6
Their second game of the day entailed the fourth-ranked Beverly Bandits Demarini. They are an elite team that is well-coached. Top Gun countered with McChristy, who had a great outing. Her curveball and rise ball were spinning like crazy and her change up missed barrels all game. It was a masterful performance by McChristy. Top Gun got out in front in the first inning scoring two, but the Bandits answered back with a run in the same inning. The score remained 2-1 until the bottom of the sixth, where the Bandits scored five runs. Their pitchers, 2021 Izzy Harrison (University of Kentucky) and 2022 Alexis Paulsen (University of Washington) were dominant in the circle, only allowing two hits, which included a two-run home run by Benning and a single by 2021 OF, Bella Herring.

Pool Game 5: Top Gun National 7, Miami Stingrays 1
Top Gun snapped a three-game losing streak in their final pool play game, which was delayed by the weather. Benning pitched five innings and collected 10 strikeouts and only one hit and an earned run. Carr came in to seal the deal in the sixth, allowing no hits with two strikeouts. The bats came alive once again for the run-rule win; Smith had a triple and three RBIs; Wilson record a hit and two RBIs; and 2022 1B/OF, Samantha Wood, had a double and a RBI.

Bracket Game 1: Top Gun National 8, Beverly Bandits JT 1
This game had a definite Minnesota flair, as both pitchers are from the Twin Cities area. The Beverly Bandits started 2022 Syd Schwartz, whose change up is nasty and is always tough in the circle. She is also an impact hitter in the Bandits lineup. However, Top Gun’s bats stayed hot from the previous day and they jumped on the Bandits early. The pitching combination from last night came through again for Top Gun; Benning had five strikeouts and one earned run in five innings, and Carr had two strikeouts and no hits to finish the game in the sixth. Wood had 3 hits and a RBI, and 2022 MIF Logan Turner, 2022 3B Annabelle Winter, and Smith each had two hits.

Bracket Game 2: Top Gun National 5, Beverly Bandits Allen 3
It was a total team effort in the second game of the day against the third Beverly Bandits team Top Gun faced in the tournament. They used all four of their pitchers, and every player was used in their lineup as well. Rhodes, McChristy, and Carr each pitched two innings consecutively, allowing three runs, all of which were earned. Down by one in the bottom of the sixth with a runner on base, Smith delivered a clutch in-the-park home run for the go-ahead run, and Affolter blasted a double to add an insurance run. Benning finished the game in the top of the seventh, allowing no hits to secure the save.

Bracket Semifinal: Top Gun National 8, GA Impact Gusaeff/O’Neil 4
In the semifinal game, Top Gun drew a rematch against the GA Impact, who they had lost to, 1-0, in pool play. The same starting pitchers from the first matchup battled again.

Unfortunately, Cochran was dealing with painful blisters on her feet, which is always tough for any pitcher to contend with; but you would not have known by watching as she competed very hard! Top Gun’s bats remained on fire from the day before. Cochran was replaced later in the contest by another Minnesotan, 2021 Annie Volkers (Illinois State), a crafty and deceptive lefty who is great at keeping hitters uncomfortable with an array of high quality spin pitches and an ability to change speeds very well. Benning had 12 strikeouts and allowed two earned runs in the complete game. 2022 OF/UT Emily Chadwick had three hits, which included two triples, and three RBIs, and Wood and Herring each had a double.

Championship Game: Top Gun National 1, GA Impact Jeffreys/Townsend 3
After waiting for the other semifinal to finish their tenth inning, Top Gun was slated to play for the championship against yet another GA Impact team. The Impact got on top early, scoring a run in the second inning, then adding two runs in the third. Top Gun answered in the top of the fifth inning, but it wasn’t enough to complete the comeback. Carr gave three great innings of relief that kept them in the game, but Top Gun’s bats cooled.

Overall, it was a great week for Top Gun National, who faced some great teams and improved along the way. Everyone on the roster contributed during the tournament, and they were able to beat some of the top-25 teams in the nation. There were also a number of great defensive performances over the course of the tournament. 2021 C Hannah Jansen caught all but two innings in the tournament and shut down the running game with her big arm. Jack-of-all-trades 2022 MIF/OF, Jadyn Sheffield, played very well in multiple positions. Wilson had a highlight worthy play on a ball in the 5-6 hole, and Turner dazzled with a number of great plays and saw a lot of action at second base.

Up next for Top Gun is the Demarini Invitational Showcase in Overland Park, KS, which will be streamed on their team’s Facebook Live page (tgaturner.fastpitchsoftball).