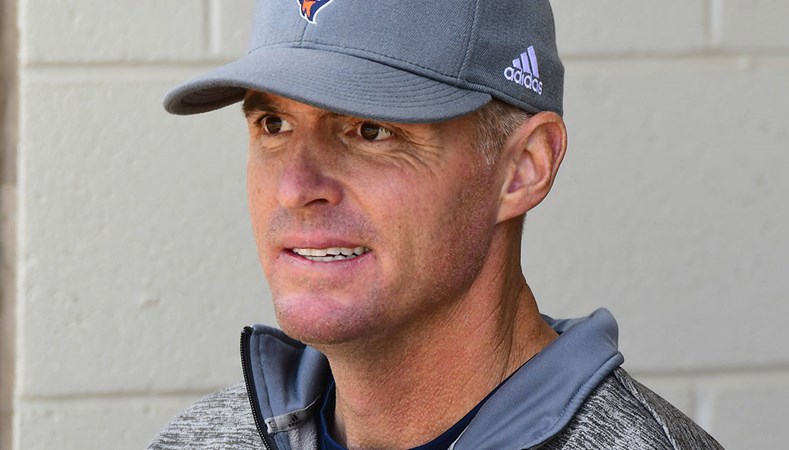 One look at Joe Guthrie’s resume is all you’d need to know what an interesting life the first-year Spring Hill College head coach has led.

After an injury ended his playing career prematurely, Guthrie spent several years in the US Army, advancing to the rank of First Lieutenant in the infantry. Guthrie spent significant time in Iraq in the mid-2000s, an experience he says he will never forget.

“There’s no question that it changes you,” Guthrie said of his time spent in a battle zone. “That’s not cliché; it’s just reality. Nobody makes it back [to the States]without serious wounds, physical or otherwise.”

“I look at it as something that has given me a unique perspective,” shared Guthrie. “It bears the burden of a unique  teaching.”

A high school baseball coaching position was Guthrie’s re-entry into the game. In Seattle at the time, Guthrie said, “I never thought I’d go back, but I was hooked as soon as I did.”

A move to Tampa and a friend’s connection landed Guthrie on the scouting side of the game. As he evaluated talent as his day job, Guthrie continued his love of hitting as he gave offensive lessons on the side.

To his surprise, quite a few of his hitting clients turned out to be softball players. That was Guthrie’s first major introduction to softball and, to hear him tell it, “that planted a seed.”

A call from Colonel James Benson proved to be a game-changer for Guthrie, and set him on a new career path. Benson, then the president of Marion Military Institute in Marion, Alabama and a career military man similar to Guthrie, wanted to start a softball program at the school, and he wanted Guthrie to lead it.

Guthrie took the call and accepted the position and began his collegiate coaching career. In the six years that Guthrie spent in Marion, leading the Lady Tigers, he guided the program to three NJCAA regional tournament appearances.

After a majorly successful tenure at Marion, Guthrie’s career trajectory led him to Penn State in the Big Ten conference. The Nittany Lions were in the middle of athletic sanctions, but that didn’t mean much to Guthrie.

“I like challenges,” he said simply. “The biggest thing that I saw out of that was the core values of the program and what you’re teaching are going to come out in the end.”

“Once I got in there and saw how those kids had been mentally kind-of kicked in the head, that was eye-opening for me… it makes you think a lot about the core of what you’re trying to do, other than just ‘this is how you hit a ball.’”

While at Penn State, Guthrie met a pitching coach for Northwestern by the name of Courtnay Foster. The two hit it off and were later married.

After Foster accepted the head coaching position at Bucknell in 2016, Guthrie joined his wife’s staff a year later as the volunteer assistant coach.

“We compliment each other in many ways,” Guthrie shared. “Different strokes that just fit.”

The summer of 2017 proved an exciting one for Guthrie. Named an assistant coach for the Scrap Yard Dawgs in the NPF league, Guthrie was part of a well-oiled machine that helped lead the franchise to a league championship in just their second season of existence.

Earlier in the year, Guthrie was named head coach at Spring Hill College, a Division II school in Alabama. Close to home once again, Foster left her own head coaching position to follow her husband south, where the two expect to form a dynamite package combo for their new team.

Honorably discharged as a captain from the Army reserves, Guthrie mused, “As an infantry officer, we believe that you lead from the front and that your word matters… discipline, integrity, gratitude; those are the three values that our team operates everything around.”