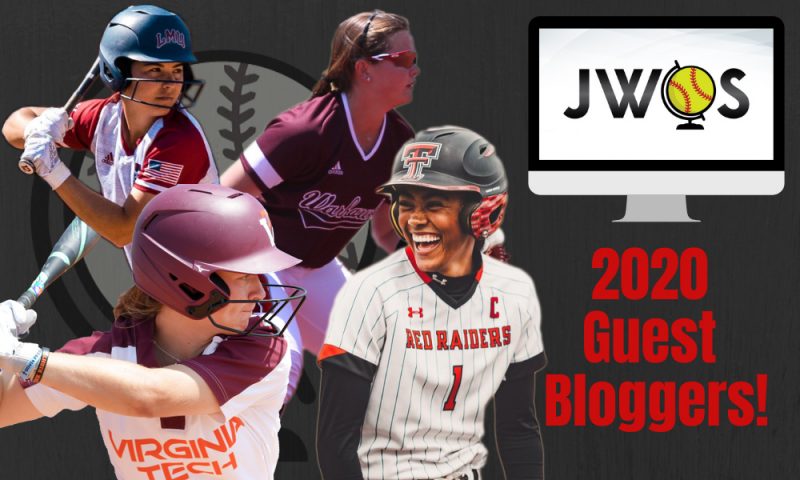 Thanks to the major success of Florida State pitcher Meghan King’s Kinger’s Korner blog during the 2019 season, we learned just how much softball fans enjoy hearing first-hand from collegiate players about their individual seasons and off-field endeavors. With that in mind, we’ve brought together an eclectic group of young ladies who will be chronicling the 2020 season exclusively through JWOS.

Burton is a redshirt junior outfielder at Texas Tech. Following an all-region and Big 12 all-freshman campaign in her redshirt freshman year, she earned her second consecutive all-conference honor with a second-team nod in 2019. The Round Rock, Texas native led her team during the ’19 season with twenty-two stolen bases, and finished second on the squad in hits and runs scored.

Grumbo is a junior catcher at Loyola Marymount. She earned her second consecutive all-West Coast Conference honor in 2019, with a nomination to the all-conference first team after earning a spot on the conference’s Honorable Mention team following her freshman season. She led the Lions in batting average, hits, and total bases during the 2019 season, and was named to the NISC All-Tournament Team in 2018.

Lawter is a junior catcher at Virginia Tech. A career .260 hitter, she earned the starting catcher’s spot for the Hokies before the 2019 season. She started forty-five games behind the plate last year and enjoyed a breakout season, recording a .278 batting average with eleven home runs and thirty RBIs. She is majoring in multimedia journalism and political science.

Mount is a senior infielder at Louisiana-Monroe. She batted .302 during the 2019 season, with seven home runs on the year – a mark that more than tripled the total of her next-closest teammate. Overall in her junior season, she led the Warhawks in five offensive categories. In her sophomore season, Mount was named second-team All-Sun Belt Conference at shortstop and also earned a second-team all-region nod that same year.

Each of the quartet of players will publish regular blog posts, and will discuss a variety of topics of their own choosing, including both on- and off-field happenings. New blog posts will be featured on the JWOS social media channels, and archived blog posts for each writer can be found on their unique blog page at justinsworldsb.com (click the Guest Bloggers tab).