WHAT’S THE DEAL WITH THE ‘PACKAGED DEAL’? 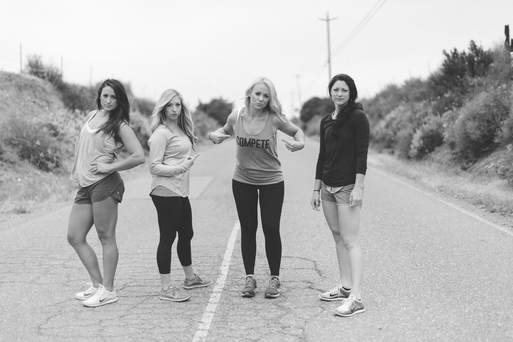 In 2015, The Packaged Deal took the world of softball clinics by storm. Never before had a group of coaches gotten together to form a super-group of teachers covering every aspect of the game. Featuring Amanda Scarborough and Jen and Katie Schroeder on board, as well as former Washington star Morgan Stuart, the quartet became one of the hottest topics in the game.

Two years later, the energy around the group has far from subsided. Young athletes still flock from surrounding states and travel hours to learn from the quartet, often soaking in as many of the tips and tricks of trade as are offered.

But just what makes the Packaged Deal tick? JWOS recently attended one of the group’s clinics near Jackson, Mississippi to find out.

Jen Schroeder is undoubtedly the group’s backbone. The vocal leader – with lungs that rival Aretha Franklin’s or Adele’s and no fear in using them – and an overflowing passion for instructing, Jen’s talents spill far beyond just leading “her” catchers.

The owner of Jen Schro Catching in Southern California and a former UCLA Bruin starting backstop, Schroeder’s success in training catchers is evident and well-known among Packaged Deal clinics’ attendees – despite the seeming-exclusivity of the position, catchers average nearly one-fourth of the young players in attendance at any given clinic, according to Schroeder.

Scarborough, an ESPN broadcaster and former Texas A&M Aggie, is the most well-known name of the group thanks to her role as one of the Worldwide Leader’s top softball analysts. She’s in charge of the pitchers when the PD is in town.

It’s a sharp contrast in style from Schroeder to Scarborough; where one is boisterous and an attention-getter, the other is more quiet and subdued, preferring more of a reserved approach. One place that the two do not differ, though, is the intensity with which they teach.

Watch just one of Scarborough’s ESPN telecasts and her knowledge of the game is evident. A former Big 12 Freshman, Pitcher, and Player of the Year and a National Player of the Year finalist, attending pitchers’ eyes are riveted on even her simplest instruction.

For Stuart, the former Huskies national champion, it’s all about defense, defense, defense. A third baseman on the Washington 2009 Women’s College World Series championship-winning team, Stuart guides players from every position to better both their defensive readiness and their quickness and agility to the ball in the field.

The team of coaches come together when it’s Stuart’s time as “boss”, each leading different drills and exercises for the allotted time. Instances like these showcase one of the main facets of the Packaged Deal’s allure – coaches that are accomplished in their primary positions of instruction, but also in other aspects of the game.

Hitting – a favorite of many clinic attendees – fell under group leadership at the event we attended. Katie Schroeder, formerly a UCLA all-American and a top draft pick of the Chicago Bandits, has been the group’s hitting instructor from its inception. Since having son Madden in May of 2016 and currently expecting her second child, Katie’s travel schedule has decreased and a who’s-who of guest instructors have taken up offensive instruction in her stead.

Nicole Schroeder, Jen and Katie’s youngest sister; an Arkansas alum; and member of the Akron Racers, and reigning NPF Rookie of the Year Bailey Landry led the charge in the offensive end of the evening in Jackson. Then, too, the whole group pitched in, each handling a different portion of a carousel-style rotation of drills.

Jen Schroeder’s role during this final quarter of the evening could be easily missed or understated, but arguably was the highlight of the night. In intimate groups of four or five, she sat the young players down and talked to them about goals, commitments, and putting in the work to celebrate the result. In the midst of several hours where much instruction could be heeded and just as soon forgotten, this was one thing that she made sure would not be lost.