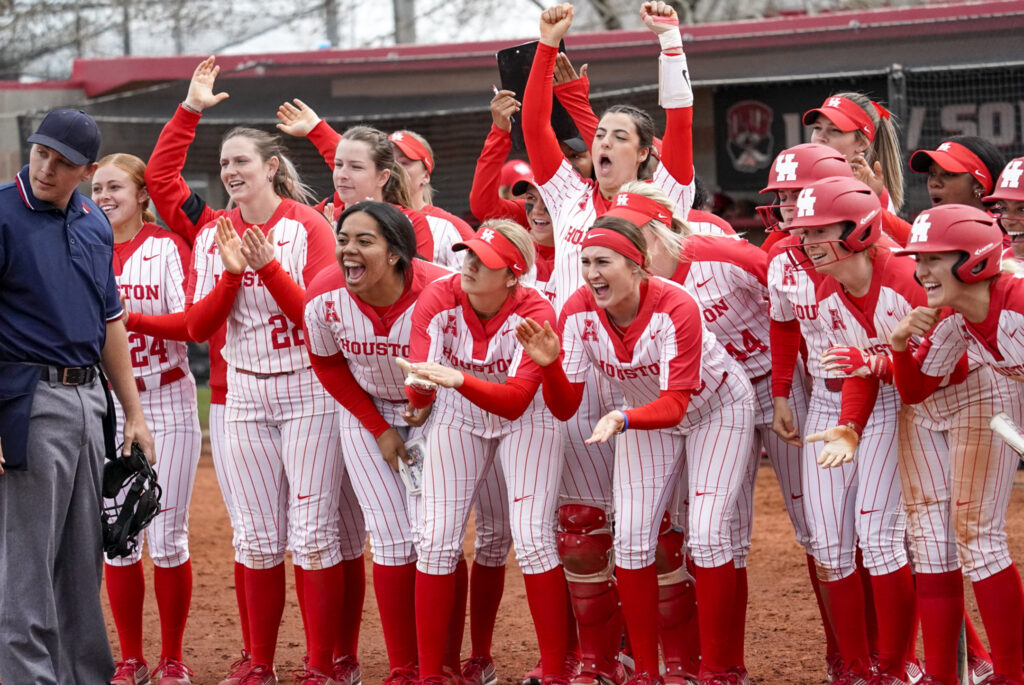 Two years ago, the Houston Cougars were in the driver’s seat of a regional and came just one win away from reaching the Super Regional round of the NCAA tournament. Since Kristin Vesely took over as head coach of the Cougars’ program in 2016, the program has collected 122 wins, emerging victorious in more than 60% of their games.

When the 2020 season abruptly ended, Vesely’s squad ranked fifth in the country in home runs and averaged nearly seven runs per game, a top-15 number nationwide. The Cougars have beaten at least one ranked opponent in every year under Vesely’s guidance and continued that streak with a win over Texas Tech in the shortened year.

After the abrupt end to the 2020 campaign, the Cougars utilized Zoom – as did so many programs across the country – and participated in team-wide book club discussions and mental training as they all learned to manage life in the midst of a pandemic. “[We knew] it was going to be different, so how do we acclimate ourselves and prepare our team for this new part of their lives was really the question,” Vesely said of her coaching staff’s approach to the offseason team meetings.

The Cougars reported minimal COVID-19 effects in the fall, though the staff did decide to shut down activities at one point to allow for some potential contact tracing effects to time out. Vesely and her staff liked what they saw from their team on the field despite the absence of live game action. “Overall, we did a pretty good job of mixing skill instruction, some game action, team stuff and not-so-much team stuff,” Vesely said in a recent phone interview.

Following the NCAA’s extended eligibility waiver that gave all players an extra year of eligibility after 2020, Houston brought back four “super seniors” for the 2021 season. Three will play for the Cougars this year – former LSU transfer Becca Schulte is taking a medical redshirt – and their return created some issues that Vesely and Co. had not encountered before as coaches.

“Obviously, you want [the seniors]back because you get the experience and leadership, and for us, those are some of our best players,” Vesely said. “But for our freshmen coming in, technically their opportunity to play is limited unless they earn it. So what we did is move around some players based on that. And we found that we have some really good ‘team player’ kids; you know, we can look at them and say ‘somebody at that position is back [as a senior], and we anticipate you playing there next year, but what’s the next-best option for spring ’21?’”

Earlier this summer, Houston added former National Player of the Year Lacey Waldrop to the coaching staff. She will work with the Cougars’ pitching staff, a unit where Vesely sees a lot of potential going into the 2021 campaign. “Going into [the 2020 season], we knew we were really young as far as game experience in the postseason,” Vesely noted. “Last year, they proved themselves early. It was almost a [feeling of]‘Whoa, okay, they’re dependable. They’re competitive.’”

Waldrop’s biggest task will be tutoring a staff that, while deep with arms, is still young. The Cougars list five pitchers on their 2021 roster; one true freshman, two “super freshmen,” and a pair of upperclassmen.

On the offensive side of the ball, Vesely said she wants to see the Cougar hitters pick up right where they left off in 2020. “[Assistant coach Lexie] Elkins did a good job of preparing them for the season with just a few months to work with them,” Vesely pointed out. “Now we know that our strengths are there, how do we prep to attack somebody else’s strengths?”

Asked about her preparation process in the presence of so much unknown for the 2021 season, Vesely paused before she responded. “Everything has just had to be more fluid,” Vesely began. “We haven’t done things like scout film yet, which is usually a December activity, because we know our schedule might change. So that means we’re working doubly hard in the second half of January… our kids have done a really good job of [being flexible], because we normally have a schedule out easily by mid-December, but even with their weekly schedule, we’ve had to adjust this or that.

“Every game that we get to play is a ‘get to’ because we didn’t GET to play last year. And there will be times this year that we’re not going to play every game [that’s on the schedule], so we have to play every game like every one matters.”

Despite the presence of so many changes and such great unknown in the current times, Vesely was ever-effusive in her praise for the members of her roster. “We’re incredibly fortunate that our kids are very goal oriented, and they want to be in the World Series,” the 5th-year head coach said. “And how we do everything every day is based on that. ‘Did we perform well enough today to be one of the last teams standing?’ You know, that’s a very broad goal, a very lofty goal. That’s one of the joys of coaching these older kids, when they say ‘this is what we want; tell us how to get there,’ and the younger kids are all ‘yeah, this is what we want; let’s figure out how to get there.’ I don’t think something like the World Series is far-fetched at all.”