Who is Mary Nutter? 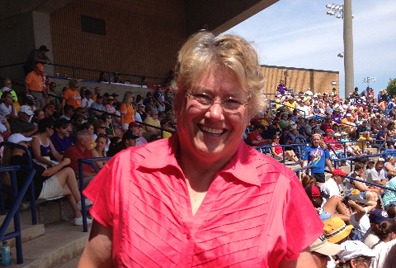 The Mary Nutter Collegiate Classic takes place every year. A two-week event in Cathedral City, California, the tournament is incredibly popular among softball fans and traditionally brings in many of the nation’s top teams.

Just who is the woman whose name the event bears as its moniker?

Mary Kathryn Nutter was born on June 25, 1947 in Cadillac, Michigan. She began her softball career at Michigan State, spending much of her early career in the Great Lakes State. She played one season as a player/coach, again with a Michigan-based team, in the WPSL, an early version of what is now known as the NPF.

After seven years as a teacher, Mary served as a graduate assistant at her alma mater, working with the Spartans while obtaining her Master’s degree.

Mary began her full-time coaching career at Pittsburg State University, then an NAIA school in Kansas. Mary earned three District 10 championships at PSU and was named Coach of the Year three times.

A 1988 inductee into the NAIA Hall of Fame, Mary was elected to the National Fastpitch Coaches Association Hall of Fame in 1997.

Mary founded and served as president of National Sports Clinics, a series of coaching clinics and was also the co-owner of a catering company.

Tragically, Mary Nutter passed away in Fairplay, Colorado on July 25, 2012 at the age of sixty-five.