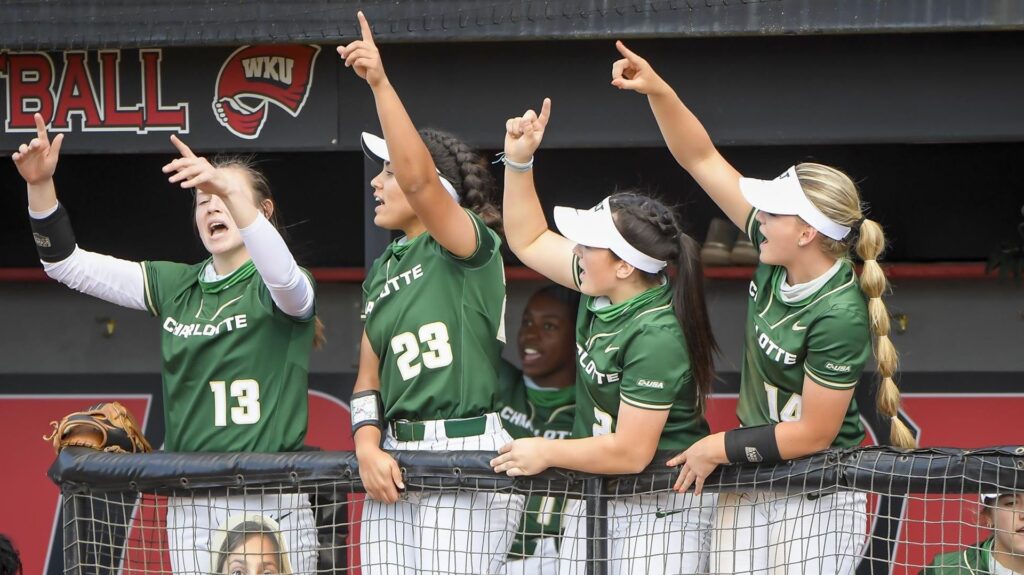 Ashley Chastain has presided over exactly seventy-seven games as the head coach at Charlotte, and in that short time period, she has already begun to engineer a major turnaround within the Niners’ softball program.

In 2019, the year before Chastain arrived in Charlotte, the squad won just fifteen games and did not qualify for the conference tournament after recording just six wins in C-USA play. The Niners were just a few years removed from a pair of 30-win seasons but were in the midst of a downward spiral that culminated in a last-place finish in ‘19.

The Niners needed a reboot, a recharge.

Chastain took the Charlotte position after two years as the Ole Miss pitching coach, an abbreviated tenure that included a 2019 Super Regional berth by the Rebels. Upon hiring his new head coach in June of that same year, Charlotte AD Mike Hill noted, “For her to leave an SEC team that advanced to the Super Regionals speaks volumes about Ashley and her shared vision of what we believe Charlotte 49ers softball can and will be.”

For her part, Chastain did truly believe in that vision. She saw potential in Charlotte, in the athletic program, in the softball team. As a coach, she saw it as a place she would find success. “I know that I’m gonna be able to thrive in that environment,” she told JWOS in an interview shortly after her hiring.

Before the 2020 season abruptly ended, the Niners were 14-13, almost equaling the previous year’s win total despite playing in roughly half as many games. The team twice took Virginia to extra innings, beat Pittsburgh, and won their first – and, ultimately, only – C-USA series over Florida Atlantic during the shortened year.

A roster that included bonafide star Bailey Vannoy finished the year with a respectable .287 batting average and a team slugging percentage of .480. The pitching staff threw to a 4.53 ERA as a unit, with a strikeout/walk ratio just shy of 2/1 and a .291 opponent’s batting average.

Production and improvements are good, but Chastain and Co. aimed even higher.

Last summer, as their inaugural recruiting efforts occuring mid-pandemic and in the middle of an NCAA dead period, the Niners’ staff turned to the transfer portal to help shore-up their roster ahead of the 2021 campaign.

The result? An explosion of proven talent descended on The Queen City.

Nebraska pitcher Lindsey Walljasper and Ragin Cajuns slugger Kourtney Gremillion headlined the new roster additions, and both played crucial roles in the team’s 2021 offering. Gremillion finished second on the team in home runs, while Walljasper led the team in innings pitched and ERA and became a trusty two-way player. Former Rutgers player Nicole Bowman, who made her transfer decision a year prior but redshirted in 2020, also contributed consistently in her single season with the club.

Chastain’s club won 31 games this season, finished atop the C-USA East Division standings, and ended the year 63rd in RPI. The Niners reached the Conference USA tournament for the first time since 2017, saw four players earn all-conference honors, and had cause for celebration when Vannoy was named the C-USA Player of the Year, the first such award in program history.

Hardly content with just one good season, Chastain has already begun to reload her roster for next season with a handful of underrated-but-quality transfer additions. That list includes former Ball State slugger Stacy Payton, one of the most dynamic power hitters within the mid-major ranks and who will join the Niners for her “super senior” season in 2022, as well as former Duke pitcher Amelia Wiercioch, who announced her transfer last year but will join the Niners this fall, as well.

While it’s both appropriate and deserved to note Charlotte’s success in gaining new talent by way of the transfer portal, one of the more impressive facts about the program’s swift about-face is Chastain’s ability to combine the efforts of transfers with “homegrown” talent in order to field a loaded-top-to-bottom roster. Players like Vannoy and sophomore standout Madelyn Wright mesh easily with players like Walljasper and Gremillion to create a unit that is willing to take on all comers.

The dust has barely settled on the 2021 season, but you can bet that the Niners are already chomping at the bit in readiness to build off of their blossoming success. The team won’t have the element of surprise in their favor next season, but whether they are the hunters or the hunted, with the talent they possess and new additions still to come, , the Niners are undoubtedly equipped to challenge for another championship.