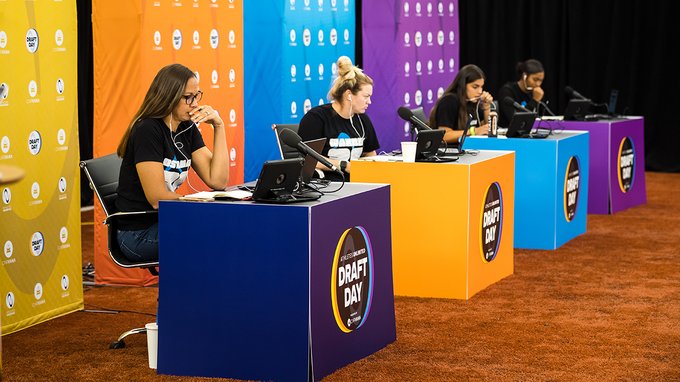 The second season of Athletes Unlimited is scheduled to begin on Saturday and there are quite a few new faces that weren’t part of the league’s inaugural season in 2020.

Among the crop of AU rookies – a group that makes up roughly 1/3 of the league’s 60-member pool of players – are Olympians, veteran professionals, and players fresh out of college. AU held a college “draft” earlier this spring that saw a dozen players earn invitations to play in the league, and a late-spring open tryout also saw four additional players signed.

Here are five first-year AU pros worth watching this season…

Amanda Lorenz, OF
Lorenz was drafted in the first round of Tuesday night’s Week 1 player draft and was the first AU rookie position player to be selected. Lorenz’s bat remains one of the most lethal in the nation, staying consistent with her scouting report from Florida and with her traditional pro team, the USSSA Pride. Her high draft position right off the bat shows that her offensive capability is still fearsome, though her general “softball smarts” have also gained acclaim. She could easily be a quick leaderboard contender in AU Season 2.

Sydney Romero, IF
The ability to play virtually the entire infield is a major positive in Romero’s scouting report, but like Lorenz, she also hasn’t lost anything since her stellar collegiate days. Romero played with the USSSA Pride and with Team Mexico this summer, finishing just shy of an Olympic medal in Tokyo and adding to her professional resume with the Pride. Romero’s bat was consistent during the Olympic Games, and she’s equal parts power and get-on-base. AU made a good call in signing Romero, and you can expect the usual heroics at the plate and on defense from the ex-Sooner.

Sis Bates, IF
One of the most celebrated players during her college days, Bates gained significant notoriety for her defensive wizardry, occasionally earning comparisons to the stellar glove work of former New York Yankee Derek Jeter. Now Bates is set to begin her professional career with AU, and you can bet that her defense will be front and center. Bates was not a bad hitter in college – she was a terrific on-base threat, as a matter of fact – but her insanely-smooth glove work is still her best-known feature. Look for her to continue that mastery as a pro.

Aliyah Andrews, OF
Speaking of defense, the legend of Air Aliyah grew every time that Andrews left her feet for a catch this season while playing for LSU. A tremendous speed threat at the plate and on the base paths, Andrews forged her own legacy with diving catch after diving catch and even made the few that she missed look pretty impressive. Aliyah, like Bates, is well-known for her defense but also brings a offensive component in her skill set. In the solid pool of pros in AU camp, Andrews may find herself slotted as a bottom-of-the-order table-setter in the lineup, but with her speed, she is a difference maker no matter where she is.

Sami Williams, IF
Williams was one of the last four players selected in the Week 1 draft, but Cat Osterman’s Gold team got a steal with the former Iowa State infielder. Williams is still seen as something of an unknown commodity to some, thanks to playing for the seemingly small-market Cyclones, but if you don’t know the player they call Slammin’ Sami, then get ready. Williams wields a wickedly-powerful bat at the plate and can smash a home run as easily as she can a single up the middle.