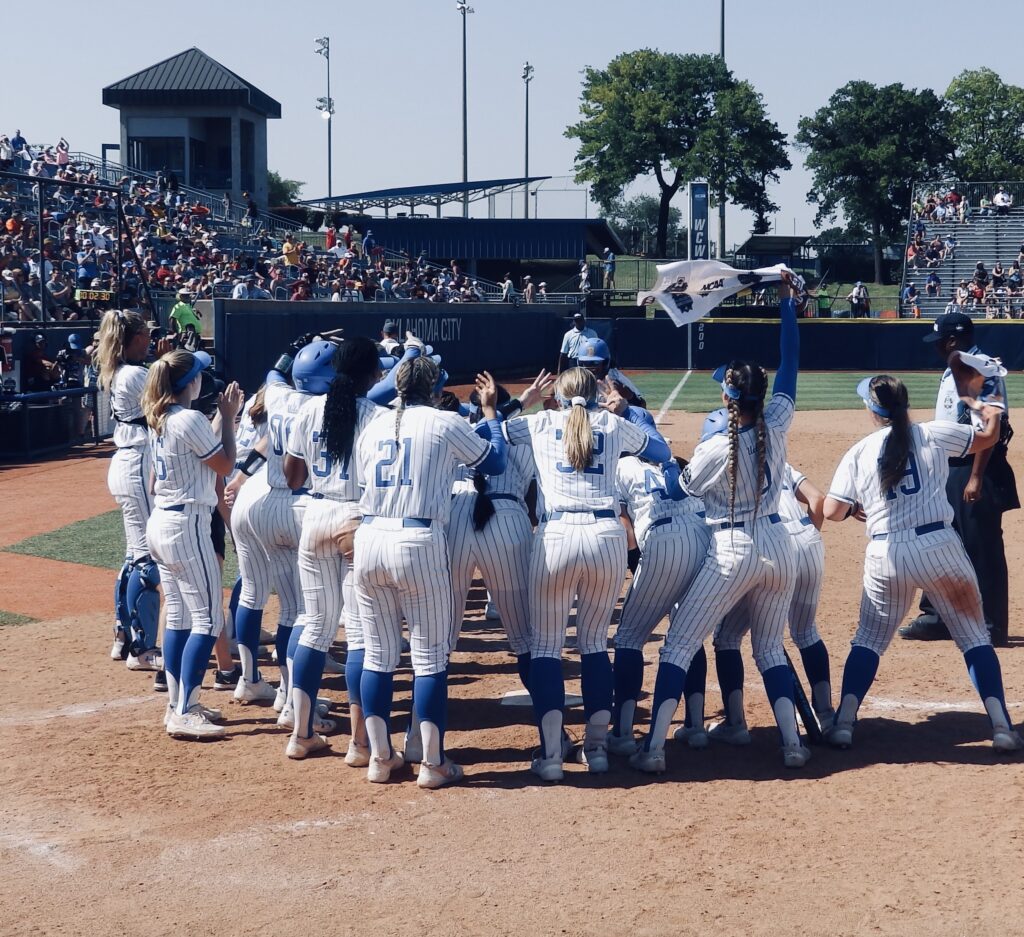 UCLA exploded for sixteen runs on sixteen hits in the game, and the offense was able to extend two innings after four defensive blunders by the Oklahoma defense. An uncharacteristic night for the Sooners, who led the nation in fielding percentage, proved costly in the most significant game of their season. Oklahoma’s pitchers gave up a total of fourteen  earned runs, an unexpected performance from one of this season’s most consistent and effective pitching staffs.

Giselle Juarez earned her fifth consecutive start, after throwing 127 pitches in 9.1 innings on Sunday. The Bruins’ ace and Player of the Year Rachel Garcia got the ball for UCLA in what looked like a sure pitcher’s duel.

Both teams got on the board early. Aaliyah Jordan got UCLA’s offense started, sending her 12th homerun on the year over the wall in right as Juarez’s third batter faced. The sophomore All-Region selection continued on her offensive tear, notching her 10th postseason RBI. Senior Shay Knighten evened the score for the Sooners in the 2nd inning, blasting her 9th home run of the season to center. The solo shot off the senior’s bat was the 6th homer allowed by Garcia in the postseason.

UCLA would regain the lead in the next frame. Kinsley Washington led off the inning with a single to short, and advanced to second as the ball was overthrown. An additional Oklahoma throwing error on Kelli Godin’s bunt down the first base line allowed Washington to score and the freshman Godin to advance to second. Another Bruin run crossed as Bubba Nickles singled to left, but Fale Aviu couldn’t field the ball cleanly, scoing Godin. The Sooners committed three errors on the inning, as UCLA scored two runs on one hit. Again in the 4th, UCLA capitalized on a runner in scoring position; Colleen Sullivan singled to center, followed by an RBI double by Washington off the wall in left. The Bruins led 4-1.

Juarez’s night came to a close as Oklahoma entered Mariah Lopez in the circle to start the fifth inning. Lopez threw 4.1 innnings the day prior, giving up two runs on four hits in that outing, recording three strikeouts. Nickles walked as Lopez’s first batter and moved to third on a single from Jordan into the right-center gap, her second hit of the night. With one out, Garcia hit what looked to be a sacrifice lineout to Nicole Mendes in center, but Mendes made a fantastic throw to home to hold Nickles at third. Taylor Pack stepped up with a bloop single to left, scoring Nickles and bringing the score to 5-1.

In the sixth, the UCLA offense batted around and tacked on six additional runs. A home run off the bat of Brianna Tautalafua towered into the left field stands, as the senior third baseman snapped her hitless postseason streak. Another hit by Washington came as a bunt single, and Oklahoma entered Shannon Saile to pitch. A walk to Nickles set the stage for Briana Perez, who hit a line drive over the wall in center for 3 RBIs. Saile walked the next hitter she faced and Garcia followed by hitting her second home run in as many games, bringing her season total to eleven. The Bruins led 11-2.

Another Sooner error led off the top of the 7th, and Mendes was entered to pitch with only 8.1 innings to her credit on the year. Kinsley Washington’s fourth hit of the night set up pinch hitter Julie Rodriguez, whose double in the left-center gap scored two. Nickles followed with a single, scoring pinch runner Stevie Wisz, then Perez doubled to right. Garcia added a single up the middle, bringing UCLA’s score to 16 and her night’s RBI total to four.

Though a lopsided score gave all of the momentum to UCLA, Oklahoma’s offense would push a run across in the bottom of the 7th after singles from Aviu, pinch hitter Kylie Lundberg, and Sydney Romero.

Pac 12 Freshman of the Year Megan Faraimo and sophomore Holly Azevedo came on in relief for the Bruins, throwing an inning apiece. Both made their first WCWS appearance in the win. Grace Green homered off of Faraimo, her 17th home run of the season and upping the freshman’s RBI total to 54.

UCLA is just one win away from their 12th National Championship, and will be the home team in Game 2. Oklahoma will need to beat UCLA twice to stave off elimination after its worst loss in program history. Without a doubt, Tuesday’s result will prove to be a much different story, as the National Championship is still very much up for grabs.