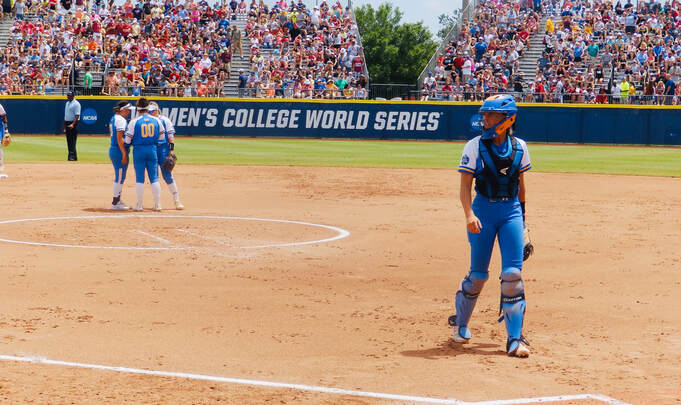 Rachel Garcia’s #00 jersey number has occupied millions of television, camera, and phone screens in recent days. Rightfully so, as the 2-time National Player of the Year is showing out in the WCWS, hitting a monstrous walk-off homer in extras and recording twenty-nine strikeouts in as many innings. Behind each of those strikeouts and every pitch thrown in Oklahoma City sits her longtime catcher, Paige Halstead.

Halstead’s role is a unique one. She has only recorded at bats in 34 of the Bruins’ 61 matchups this season, only hitting for herself when pitchers Megan Faraimo and Holly Azevedo are throwing. With a designated player in the lineup, and Rachel Garcia hitting for herself, Halstead frequents the No. 10 lineup spot when Garcia is in the circle. For a game full of home runs and gaudy offensive numbers, a defense-specific catcher is a thankless job. Yet, the senior has anchored down the Bruin defense and her role as the 3-time All-American’s battery mate.

The Rancho Cucamonga native is phenomenal behind the dish. This season, she’s made a single error in more than 300 chances and leads the defense in fielding percentage at .997. Considering Halstead’s glove touches the ball just about every play, such a defensive showing is remarkable. For an athlete so good at her job, you’d think she’d have been at it for years. Yet it took some time in the game to find her true calling – she took up catching as a junior in high school.

“I started off as a shortstop… My dad and brothers, Ryan and Josh, really persuaded me to get into catching. I felt like it was more natural for me. I really looked up to Ryan Babineau, he really helped me.” Halstead noted watching Babineau, an All-American catcher at UCLA from 2006-2008, who was drafted by the Arizona Diamondbacks in 2008.

At any level of the game, a vocal catcher is crucial. Halstead has made a routine out of making sure hers are calm and comfortable, so the sport’s biggest stage is no sweat. “It’s unreal, seeing everybody come together, especially in the biggest of moments. We don’t make anything bigger than it is.” The veteran’s energy is unmatched, often stepping out from the catcher’s box in between pitches to communicate with the infield. Halstead’s liveliness comes from a love of playing the game. “I’m just out there enjoying every moment and every second, especially now, being a senior.”

For a Pac-12 stalwart with a roster full of talent in recent years, this go-around looks a bit different in more ways than one. For the first time since 2010, UCLA has reached the Championship Final. The players attribute the team’s camaraderie and culture to their success, along with enhanced performances on both sides of the ball, but a behind-the-scenes change early in the season opened a window of opportunity for the Bruins’ pitching to become the force we see today.

Head coach Kelly Inouye-Perez met with Garcia at the end of the 2018 season, as the two agreed the rising junior would need to develop a pitch lower in the zone to complement her rise and curve. “With that, I wanted [Rachel] fully committed to it. I had her calling her own games… It’s a craft, a skill, to be able to call games,” Inouye-Perez said. When a critical moment arises, Inouye-Perez and pitching coach Lisa Fernandez allow Garcia and Halstead to take the reins.

Inouye-Perez was Fernandez’s catcher when the pair donned the Bruin blue, so both coaches understand the importance of the athletes trusting what pitch is called. Garcia and Halstead combine scouting reports, their high game IQ, and an innate feel of the game to guide their pitch calling. “They are studying, we’re communicating in between every pitch,” Inouye-Perez added. “There’s times we say ‘remember what we studied, there’s a plan in place and execute it.’… They’re working together as a unit, the pitchers, catchers, and [Fernandez].”

The great softball minds of Garcia, Halstead, Fernandez, and Inouye-Perez have combined for countless wins. All four converged this season and created a process that makes UCLA’s pitch calling unpredictable. Halstead could not be more pleased that the plan created months ago has come to fruition in Oklahoma City.

“Coach Lisa works so well with Rachel, they have the same mindset, and we all respect her so much,” Halstead said. “It’s really a group effort… Rachel and I are always on the same page. It’s kind of hard not to be when we have the rhythm of the game flowing like that. I think it comes along with experience, as well. I think we both earned it.”

On the cusp of their 12th national title, the Bruins are rolling. All eyes are on the long ball, the big strikeout, and Garcia. The cameras won’t follow Halstead around, and Holly Rowe will likely interview one of her teammates postgame, should the Bruins add another victory in the win column. Even so, the senior couldn’t care less. Her coaches and teammates know how imperative Halstead’s role is, as her character and humility shine through her energy on the dirt.

“I’m just out there enjoying every moment,” Halstead said. “It’s a privilege to play in this spotlight, on this field, with this team.”