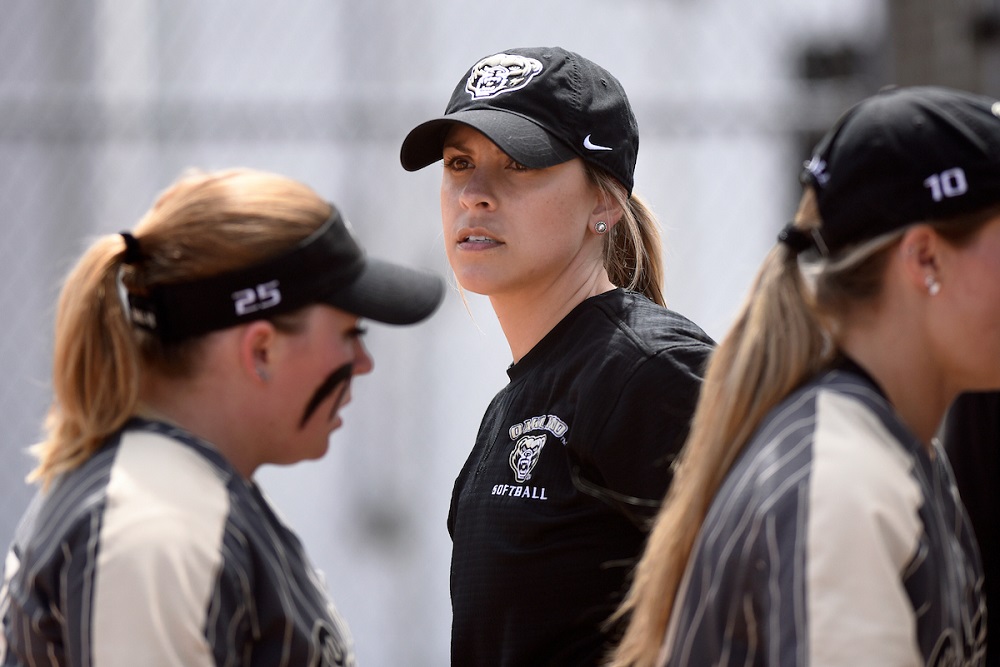 On April 27, 2011, the Oakland Golden Grizzlies softball team split a doubleheader against Michigan State in Lansing. That victory would stand as Oakland’s only win over a Power Five program for the entirety of the 2010s decade. When that win went into the record books for the Golden Grizzlies, Lauren Cognigni was a 3rd-year assistant coach at Marist College, and Sydney Campbell was in elementary school.

Fast-forward a decade to the present day, and Cognigni is now Lauren Karn, head coach of the OU softball team. Campbell, now a super-freshman pitcher, is the fast-emerging ace of the Golden Grizzlies’ pitching staff.

Under Karn’s guidance and with Campbell enjoying a breakout campaign in her first collegiate season, the Golden Grizzlies got off to a quality start during the 2020 spring season. The squad began the year with a win over Buffalo, later adding victories over teams like UMass, Villanova, and ACC foe Clemson. That win over Clemson, in the Tigers’ first year of existence as a program, ended Oakland’s 9-year winless drought against Power Five opponents.

“Last year, we had excellent team culture,” Karn said as she reflected on her team’s 2020 performance. “We had some pieces back into our lineup that had been injured the year before. We had two of our best players back from injury, and a freshman on the mound who we could really rely on to be consistent. The combination of everything really gave the team more spunk, as I like to call it. The team just constantly had faith, confidence, and understanding that they could get back into any game.”

Karn and her staff saw took some major positives from the team’s performance this fall, with the offseason months including a bevy of team practices and activities. “When we got going, everyone was so eager to start that it almost felt like we picked up right where we left off [in the spring],” Karn shared. She took particular care to commend her large freshman class for finding and embracing their roles quickly, despite the abnormalities of the fall season.

Led by the afore-mentioned Campbell, look for the pitching staff to be a strength for Oakland in 2021. “[Campbell] is someone that I would call a silent leader; she does the right things, makes great decisions, and is super competitive,” Karn said. “Knowing that we have more days where our full roster is ready to go and that we can hold our own in the circle, I think it showed last year that we can compete with some bigger teams. Even with the bad losses that we took, the ability to legitimately compete was something that did us a lot of good.”

The Golden Grizzlies boast a 7-headed pitching staff in 2021, including four players who exclusively pitch. A variety of speed, movement, and consistency from the group give Karn any number of options in the circle, something that she called “really exciting.”

Speed and unsung heroes are two themes that Karn expects from her offense in the coming year. “We definitely have more speed and several players who can get on base a lot,” she noted. “I look for us to have more stolen bases this year, and I also look for us to have some players step up who maybe don’t get the spotlight but always contribute at a consistent level.”

Discussing her lineup, Karn admitted that she takes a traditionally-unconventional approach to setting her batting order. “I learned it from Holly Aprile [at Pitt],” she said with a laugh. “You have to give your best hitters the most at-bats, and it will pay off because you put them in a position to not get walked around.”

As a freshman in 2018, Maddie Jones won the Horizon League’s Freshman of the Year award and was the Golden Grizzlies’ starting third baseman. After redshirting the 2019 season due to injury, she led the team in 2020 with a .328 batting average and a .936 OPS. Karn touted Jones’ progress this fall, calling her one of the team’s “X-factors on offense” in 2021.

Now entering her fourth season at the program’s helm, Karn knows what she wants to see from her team in the year ahead. “I want my girls to get the ebb and flow of a real season, and we still don’t know exactly how we’re going to do that,” Karn said, noting the lingering uncertainties about the 2021 season. “It’s going to come in different forms of competition, weeks that are harder and weeks that are a little less challenging than others. But I want them to have that, and for our young players to get to experience what that’s like since many of them really don’t know what that’s like yet.”

After an impressive start to the 2020 campaign and with a core of young standouts on the roster, look for the Golden Grizzlies to make some noise in the Horizon League this year and beyond.