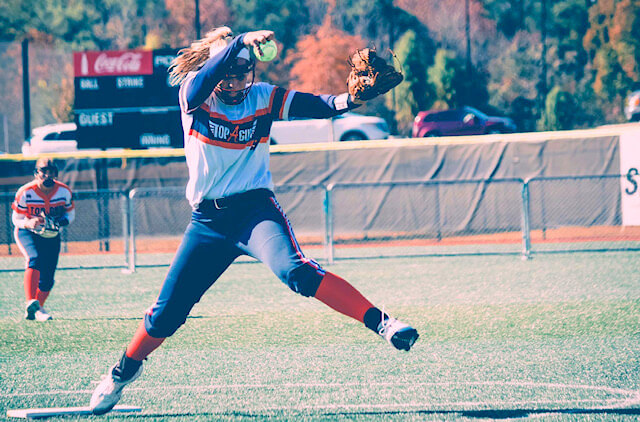 Hey JWOS! My name is Allison Benning, and I’m a right-handed-pitcher from Stillwater, Minnesota. For all you non-Minnesota natives, Stillwater is a suburb that is about 20 minutes east of Minnesota’s capital, St. Paul. I live with my younger brother, Brady, and my parents, Mike and Carla.

I am currently a junior at Stillwater Area High School. Although, like every other kid in the United States, all of my classes are online. This means that I have to take my exams and do my homework at home.

I’ve been playing softball since I was seven years old. I played for my city’s team for a while, then I joined a local club organization, the Minnesota Magic, who is one of the best clubs in Minnesota. After playing with them for three years, I joined Bob Turner’s Top Gun 16 National team in Lee’s Summit, MO, which is one of the most premier teams in the country.

I grew up in a softball family, and I first learned how to pitch when I was six years old.

Since my dad was a pitcher in a men’s fastpitch league, he was the one who first taught me how to pitch. My mom would sit on the bucket and catch, since she was a catcher in high school.

She can’t catch me anymore, though, I throw too hard for her to see the ball very well! She also got a lot of bruises over the years.

The next phase of my development was getting pitching lessons from Rich Foore, a pitching instructor out in Richfield, MN. I wasn’t very good when I first started, so it wasn’t uncommon that something would break during a lesson 🙂 Despite this, I always had fun when I was pitching; it was there where I first started to enjoy softball. Then, after a couple of years with Rich, my dad started taking me to see Michelle Harrison, who had a facility in Eagan, MN. She was a great instructor, and was the one who cultivated the passion I have for softball today. She pushed me to my limits and made me stronger mentally and physically. Unfortunately, she moved to South Carolina when I was about thirteen years old. I then got to work with Sara Moulton, who was an All-American at the University of Minnesota and one of Michelle’s former students, and was also my all-time biggest hero and inspiration. I loved watching her pitch on TV when I was younger, and I wanted to be just like her. I even have one of her Chicago Bandits jerseys! I’ve been seeing her ever since, and she has been a very impactful coach and figure in my life. After a while, the year before I joined Top Gun Fastpitch, I was introduced to Randi Davis, the organization’s pitching instructor. She’s been instrumental in my development as a pitcher. She has helped me have a huge jump in speed and made my mechanics more consistent. 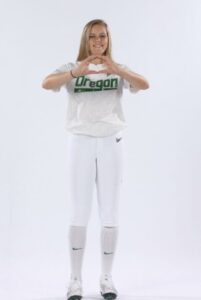 I also love to hit. Even though I throw right-handed, my dad taught me (and my brother when he played baseball) to hit lefty. I hit for power (because I’m not very fast), but I can also hit for a high average. When I was with the Minnesota Magic, I took hitting instruction from Rick Pickett, who is now an assistant coach at Concordia-St. Paul. Even though he liked to tease me, he was a great coach who helped me improve my power and swing. Then, I met Tony Milz, who is Top Gun’s hitting coach. He has helped me a lot with my mechanics and keeping my swing more consistent. I also have occasional FaceTime lessons with my current club coach.

While I love to play softball, most wouldn’t know that I also play tennis. I’ve been playing for five years or so. I made the varsity tennis team as a freshman, and was named a captain for my senior season next year. When I’m not playing sports, I like to get in the gym and work out. My personal trainer, Natalie Fleming (out of Troy, MO), makes workout plans for me that help me get stronger for softball specifically. I also enjoy being with friends, watching Netflix, shopping and traveling.

Well, that’s it for me, I hope you enjoyed getting to know me!