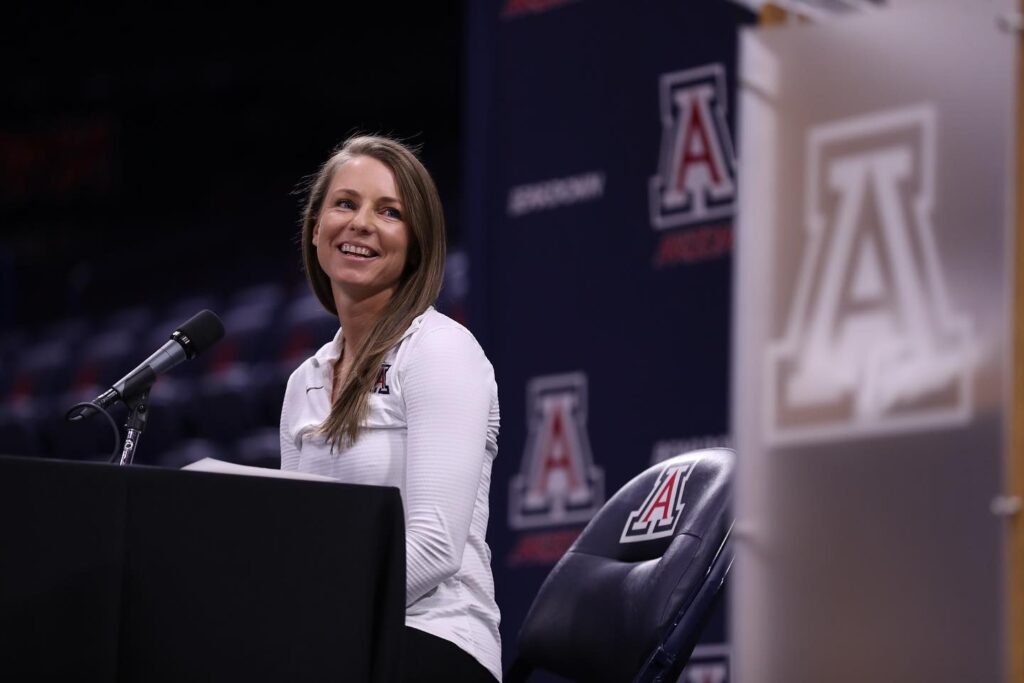 Rarely, if ever, does a college softball team field a coaching staff that boasts stellar playing resumes as well as legitimate coaching success.

A number of coaches fit into one category or the other, but a complete staff that fits both descriptions is a rare and celebrated thing. While broadcasting for Athletes Unlimited this summer, Danielle Lawrie made a comment about how highly-anticipated the new coaching staff is at Arizona. She’s right, and a big reason why is because the entire staff stands impressively at that bridge between playing and coaching success.

Look at Caitlin Lowe, for example. Taking over the reins of the program that Mike Candrea led for decades is no simple task, yet Lowe is widely regarded as the perfect person to do so. She studied under Candrea as a player, filling her trophy case during college before going onto to equally-decorated tenures with Team USA and professionally. As a coach at her alma mater, Lowe has had a firm hand in tutoring some incredible offensive players and the Wildcat outfield has seen All-Americans and stars on something of a revolving door.

Then there’s Taryne Mowatt-McKinney, another Wildcat great who returned to her alma mater as a coach. Who could forget Mowatt’s 1000-pitch performance in the 2007 Women’s College World Series that earned her tournament MVP honors and a pair of ESPY awards? Nearly a decade and a half later, Mowatt still holds some PAC-12 single-season records and impressively translated that success as a player into success as a coach.

At every stop along her coaching path – her return to Arizona in 2017 marked her third pitching coach position – Mowatt has seen success. At Cal Baptist, she mentored a conference Pitcher of the Year and saw her staff earn all-conference awards. At Ole Miss, she helped guide the Rebels to the NCAA tournament for the first time ever and led the pitching staff to lower their team ERA by more than a full run in consecutive seasons. Since she returned to Arizona, the Wildcat pitchers have performed well above expectations on multiple occasions.

Rounding out the Wildcats’ full-time staff is Lauren Lappin. A former Olympic teammate of Lowe’s, Lappin’s coaching path is not as eye-popping as that of her coaching staff counterparts, but has more than her share of highlights nevertheless. A former All-American and Olympic medalist as a player, Lappin began her coaching career by helping build the Roosevelt University program from the ground up before moving onto to Missouri-St. Louis. UMSL made a trio of postseason trips during Lappin’s tenure, and she also coached the Chicago Bandits to the 2019 National Pro Fastpitch regular-season title, helming the league’s Coaching Staff of the Year that same season.

What Arizona will bring to the table in 2022 remains to be seen; following the graduation of a large senior class, the Cats’ on-field product is sure to garner much interest. But with a veteran, star-studded coaching staff, even if a learning curve has to happen within the UA roster, success is sure to be just around the bend.