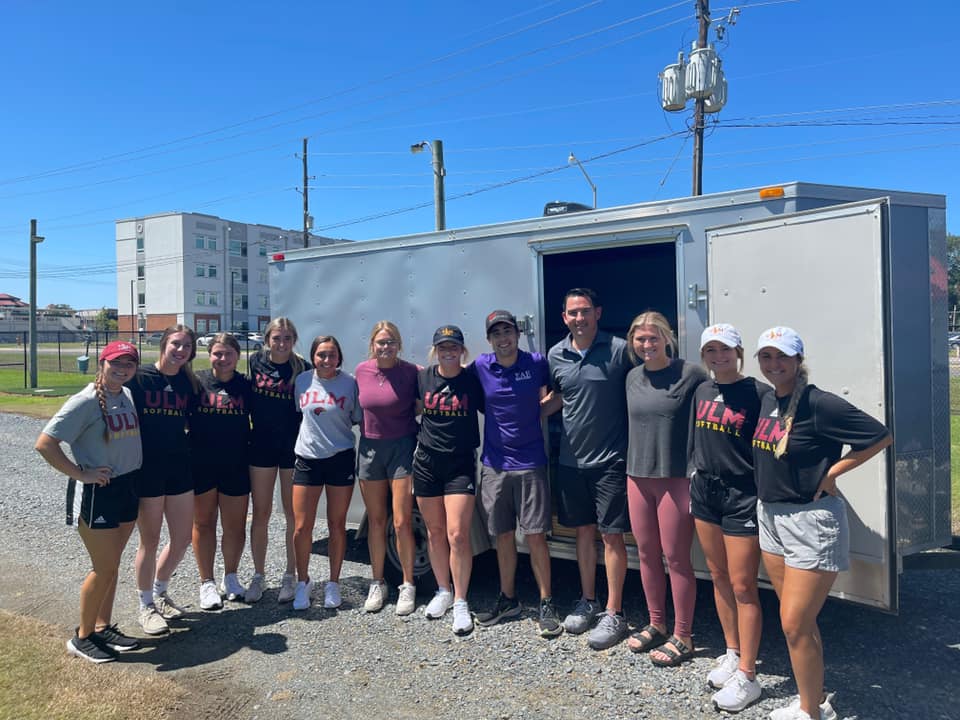 When Hurricane Ida made landfall in the southern portion of Louisiana on August 29th, the storm left a path of devastation in its wake.

Portions of the state saw significant damage, with buildings and areas completely leveled, as well as flooding and widespread power outages. In the northern part of the state, the city of Monroe was largely spared from the expected effects of the storm.

After Ida passed through, Louisiana-Monroe catcher Kelsey Giddens was on the phone with a friend when something he said caught her attention.. That friend, Andrew – himself a native of south Louisiana – was preparing to take a trailer of supplies down to a hard-hit area of the state from his current home in Tennessee.

“When he told me that he was going to do that, I knew right then that I wanted to help,” Giddens said. Before that phone conversation even ended, she jumped into action and began reaching out to her teammates.

The response from Giddens’ fellow Warhawks was immediate and unanimous: They wanted to help, too.

Project coordination is firmly within Giddens’ skill set – “I consider myself kind-of a behind-the-scenes leader; I like to do the things that just need to be done” she termed it – so she was the perfect person to helm the project. Members of the team who were already out shopping picked up some extra supplies to give; others made special trips to be able to contribute. The “VLP”, the team lounge, became the drop-off location and de facto storage facility until the supplies could be picked up for the trip down south.

When Giddens arrived at the VLP for the first time after her teammates’ donations, she found herself quickly in tears. “I’m not a super-emotional person, but when it comes to things that are personal to me, I tend to get quite emotional,” she expressed. “I had tears in my eyes [when I saw it all]. I was like ‘this is above and beyond what I could have done’ and it was absolutely amazing.”

One day later, Andrew arrived with his trailer to load up the supplies. Giddens sent out another group text ahead of his arrival; knowing her teammates had staggered class schedules, she wasn’t sure who might be able to help load the supplies, but she decided to ask. Yet again, the team responded en masse as almost a dozen Warhawk players and staff members showed up to help fill the trailer.

“The ladies of the ULM Softball team are absolutely INCREDIBLE!” Andrew wrote in a Facebook post later that day. “Student athletes are some of the most restless and busy non-stop people around… they spent their individual personal money on these items. They also spent the very little spare time they had in the last 24 hours to give back to their state.”

Giddens, for her part, said she was not at all surprised by her team’s response to her sudden and quick request. “You hear people from different schools that say once you get to college, your teammates will be like family. But then I also don’t think a lot of colleges have what we have [at ULM]. The amount of support that we show one another… if I’m having a bad day, there’s not a doubt in my mind that anyone on this team would go above and beyond for me. Our team chemistry isn’t just on the field,” the third-year catcher said. “And I think that is part of things like this too; it’s the little things that go a long way in today’s world and anytime we’re given that opportunity to bring a little bit of joy to other people, it’s huge and goes a long way and I think this team really knows how big a difference the little things can make.”