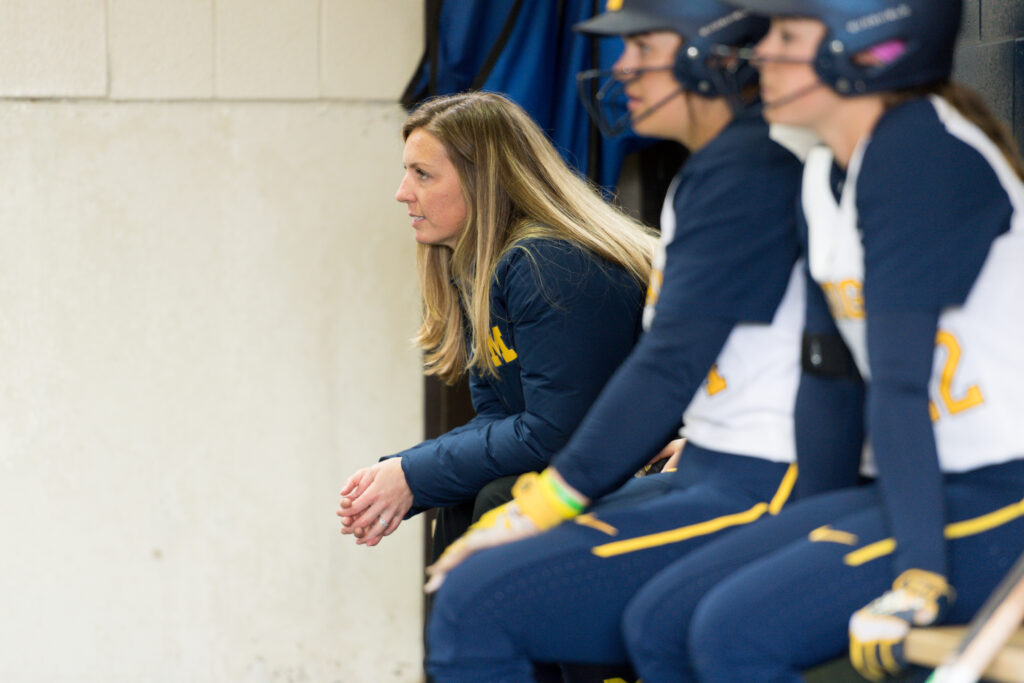 When Georgia Southern made a coaching change this summer, the Eagles brought in a head coach that was familiar in the state of Georgia in Sharon Perkins. When it came time to hire a staff, Perkins brought in a familiar name to the program specifically when she hired Mary Beth Dennison as an assistant coach.

Dennison was on staff at Michigan, serving as the volunteer assistant coach for the legendary Carol Hutchins. She’s no stranger to coaching in the state of Georgia, with stints at Georgia College and East Georgia State on her resume.

Following her return to Statesboro, Dennison talked about her coaching career; navigating the last several months as a volunteer coach; and returning to her alma mater in a new role.

JWOS: When did you know that you wanted to pursue coaching as your career path?
Mary Beth Dennison: Early in my college career, I injured my back significantly enough to decide that it would be in my best interest to stop playing competitively. I transferred to Georgia Southern leading into my junior year. Not long after getting to Statesboro I realized that I could not stay away from the game. I coached 10u softball for Bulloch County Parks and Rec and began giving pitching lessons, which led to coaching travel, high school and eventually at a local JuCo.

JWOS: Tell me about coaching at Michigan and the biggest lessons you were able to glean from that historic staff.
Dennison: Coaching at Michigan was an opportunity of a lifetime. I could not have picked a better place to be the last three years. I can honestly say that I felt valued every single day that I was a part of the staff at Michigan. During my interview with Hutch, she stated pretty clearly that she expected me to be very involved and that she was not hiring me to be a ‘yes’ person. She truly meant that. She values differing opinions and I think that type of leadership has played a huge part in the success the staff has garnered. I was able to see firsthand how empowering the people around you elevates a program.
I think the relationship piece of coaching was something that I was able to learn a lot about while on staff. I gained insight into what creating strong relationships with players looks like and how fostering those relationships as players become alumni impacts a program. Michigan’s alumni are the team’s biggest fans and their continued support for each other and the program is pretty awesome to see from an outsider’s perspective.
I could give you examples of so many lessons all of which are impactful to my growth as a coach. Softball specific, prior to Michigan, I coached high school, juco and DII all of which have limited scouting and video so I was able to learn how to prepare for an opponent in depthly. I also learned a tremendous amount about how softball on a large scale (and by large, I mean huge P5) operates. I am so thankful that the staff was willing to teach me so much and accept me as part of their Michigan softball family.

JWOS: How tough was life as a volunteer assistant coach over the past year and a half? How were you able to navigate those waters and stay in the game?
Dennison: I can’t say the past year and a half was a breeze, but it was challenging in ways that only made my husband and I stronger. Honestly, I contemplated changing careers or just giving lessons. Thankfully my husband loves that I coach college softball and was quick to tell me that we didn’t move to Michigan for me to change careers. We are also extremely blessed that his job wasn’t drastically impacted by covid. Much like other volunteers, I had to get creative with making an income. I grocery shopped for Amazon and Shipt, gave a few lessons to younger girls, and found a couple of facilities that allowed me to host several clinics. Along the way we also had a happy and healthy baby!

JWOS: I know you’re only a couple of months into the role and a couple of weeks into actively coaching at most, but tell me about taking the position at your alma mater and what it’s been like to return to Statesboro in a new role.
Dennison: I came to Georgia Southern my junior year of college and stayed in the area for close to 7 years. I consider Statesboro home. During and after undergrad I worked for a period of time in the athletic department in various roles. I am thrilled to be back working in the department on the coaching side of things.

JWOS: Obviously, as a coach, you want to compete well and to win, but there’s got to be an added “oomph” in doing so at your alma mater, right?
Dennison: There absolutely is. I have an immense amount of pride in Georgia Southern and have every intention of helping our staff put the best product on the field.

JWOS: Describe your coaching style. What do you see as your biggest strengths as a coach?
Dennison: I take a holistic approach to coaching. I view the young women I coach as a whole and not just an athlete. I taught middle and high school, where I learned pretty quickly that students learn and communicate differently. I definitely think teaching, even if for two years, was one of the best decisions I could have made for my coaching career. I fully understand that I can’t get the best out of a young woman on the field if I don’t take the time to get to know her as a person, her learning style and how she communicates. I also think my honesty and ability to communicate well with the age group that I work with is a strength of mine.

JWOS: If we’re doing this interview one year from now, what do you want to see happen in your first year at Georgia Southern that would let you sit back and say ‘this has been a successful year’?
Dennison: That’s a tough question, because we haven’t had a minute to forecast a week from now. We have seen growth from our team in so many ways in a matter of a few weeks. The enthusiasm and openness from our players has been amazing. Reflecting upon our first full year, I’d like to see that we were able to build on to the talents and strengths that these young women have and create a winning culture.