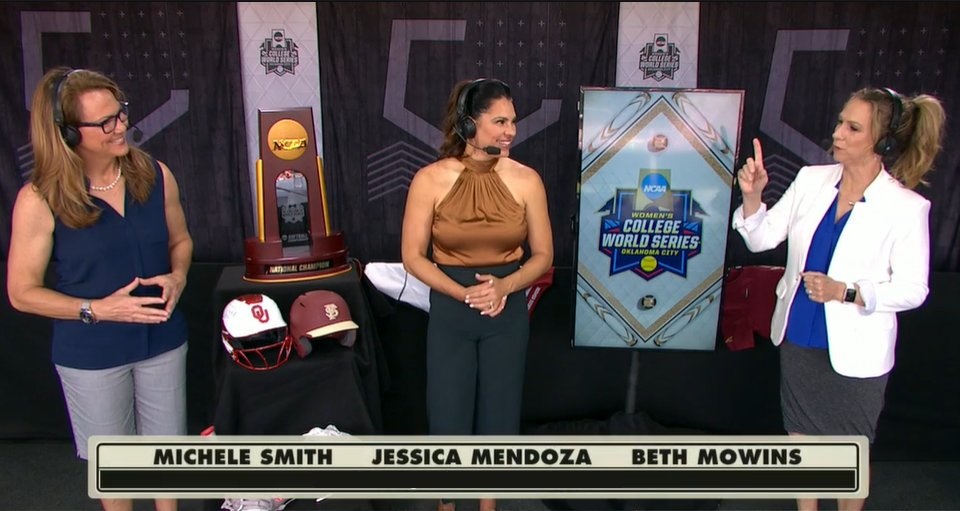 When you watch softball in the Tokyo Olympics, you will hear familiar voices calling it.

NBC officially announced in late June that Beth Mowins, who has worked 27 Women’s College World Series championship tournaments, will call Olympic softball alongside analyst Michele Smith. Smith is a two-time United Stated Olympic gold medalist in softball; she and Mowins have worked together at ESPN since Smith joined the network in 1995.

Also part of the softball coverage will be Jessica Mendoza, who won a gold medal in 2004 and a silver medal in 2008 as part of Team USA. Mendoza will report on-site in Japan for softball coverage, while Mowins and Smith will call the action remotely from NBC studios in NBC Sports Group’s International Broadcast Center in Stamford, Connecticut.

For Mowins, this will be her first time as part of NBC’s Olympic coverage; Smith was the color commentator for NBC for softball in 2008, the last time that the sport was in the Olympic Games.

Mendoza is also making her Olympic broadcasting debut, and she will report on other Olympic sports for NBC in the role. Mendoza covered the 2010 Vancouver Winter Olympics for Yahoo! Sports, and has covered softball as well as additional sports since joining ESPN. Mendoza has served as color analyst for Major League Baseball and also worked as a sideline reporter for additional sports at ESPN.

Other notable broadcasters that have connections to softball will also be part of the Olympic television coverage. Jenn Hildreth, who has called softball for several years and called the most recent postseason with Brittany McKinney, will be part of NBC’s remote play-by-play roster for Olympic soccer. Lisa Byington, who called Big 10 softball, will also serve as a remote play-by-play broadcaster for soccer coverage. Courtney Lyle, who has called softball for ESPN and anchored studio coverage from the Women’s College World Series in June, will be the new play-by-play voice for Olympic field hockey.

Click here to view the full NBC TV and streaming schedule for softball.