Rounding the Bases with Fran Strub 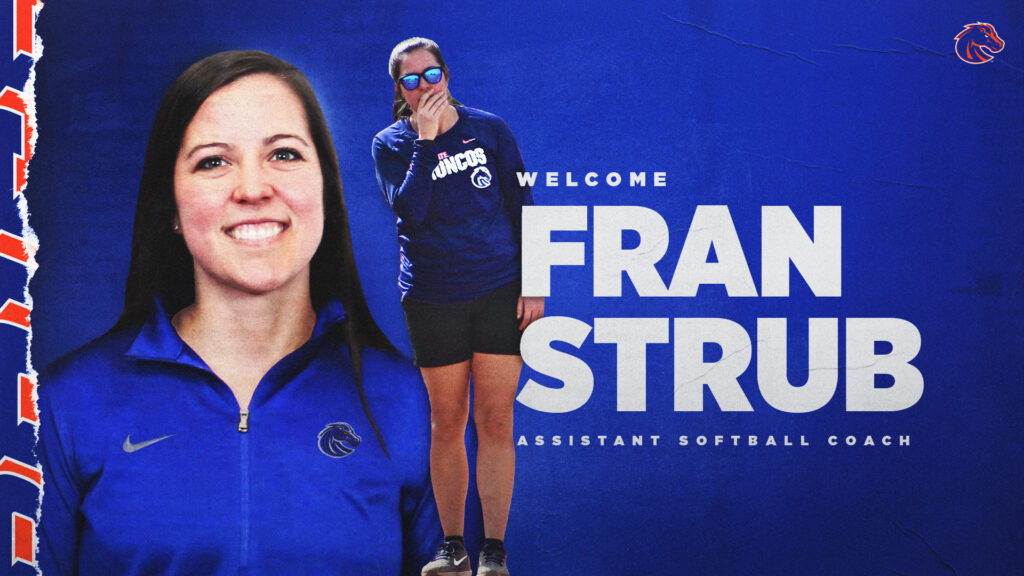 Boise State reached the NCAA tournament in back-to-back seasons in 2018 and ’19, and a new coaching staff is in town for 2022 to try to continue the postseason trend that began under the last two head coaches. After Justin Shults’ hiring as the Broncos’ new head coach, the first addition to his new staff was Fran Strub.

Strub spent the last four seasons on staff at Northwestern, serving as the volunteer assistant at her alma mater for the last three years. During her playing career, Strub appeared in 176 games as a Wildcat; during her senior year, she batted .412 in the postseason. In 2016, she was honored as a Big Ten Distinguished Scholar.

After her arrival in Bronco country, Strub talked about her time on staff at her alma mater; living life as a volunteer coach during a pandemic; and her new job.

JWOS: When did you know that you wanted to pursue coaching as your career path?
Fran Strub: It was kind of a natural transition, as my playing career was winding down, I was exploring some next steps but didn’t find anything that made me excited. Coach Drohan floated the idea of staying another year as a student coach and one year turned into another and another and I was able to start my coaching career in a great program with incredible mentors. I have done some other things on the side, but when I am coaching it doesn’t feel like work, it just feels right. It is exciting, challenging, and requires a lot of adaptability that keeps it fresh and keeps me on my toes.

JWOS: Tell me about coaching at your alma mater; what was it like to be in a familiar place, but in an entirely different role?
Strub: It was amazing. As I said, it was kind of a natural transition because as I moved through the program as a player I was becoming more and more of a leader, and just like when I was a player, as a coach I was always trying to improve and get better. The skills I was working on just changed. Instead of working on my swing or fitness, I was working on my communication, teaching, knowledge of the game, and game planning. It was a new role, but not an entirely different one. I love Northwestern and am grateful to have had more time there. In my time, the athletic department grew so much with facilities, staff, and success. So while there was a lot of familiarity, it was also a very different department than the one I played for, and I think that is a really good thing. If you aren’t getting better, you are getting worse—that goes for players, coaches, and departments, so to be able to watch the growth in the athletic department and see it transfer across all sports was very fun to be a part of.

JWOS: How tough was life as a volunteer assistant coach over the past year and a half? How were you able to navigate those waters and stay in the game?
Strub: Like a lot of things in life, if you really want to do something, you figure it out. While there were fewer opportunities to work camps and clinics, I had more time to read books, learn other ways of teaching, and reflect and improve on our yearly plans to make sure that we are improving and getting better each year, developing players, and improving team strengths. I set a realistic budget, picked up a remote side job, and worked to improve myself as a coach, and find ways to improve the program, knowing that there would be a return on that investment in the future. From the start of the lockdown in 2020, Coach Drohan made it a priority to get the team better in whatever format was available, and it took some creativity throughout the summer, but the buy-in with the team was great and showed when we were all able to get together again that fall. We had weekly team Zoom meetings and then smaller group meetings throughout the week to talk about what was going well for them at home, what they needed help with or ideas for, and we also broke down skill sets for all areas of the game in classroom-type sessions. It was a great exercise in controlling what you can, because as we know, lots of people were affected in almost every way that you could think – and still are – throughout the pandemic, and though we didn’t know when we would be back on the field again, the team really took advantage of their time apart to improve their individual skills and continue to grow relationships with their teammates to be ready.

JWOS: What aspects of the Boise State position intrigued you? What was the linchpin that made you say ‘yes’ to taking the job?
Strub: I was familiar with Coach Shults and his path to Boise State so when his hire was announced, I was immediately intrigued. We began having some conversations and clicked right away in our styles and philosophies and as he talked about his vision for the program, I believed it as well. The athletic department has a great brand; I was excited about the new leadership in the department and what they’ve been able to do already in less than a year. Leaving Northwestern was always going to be hard because it is a place that has given me so much and the people are incredible, so I was hoping to find a program that was the right fit, and was with a staff I could continue to learn from. I was thinking location would be a bonus, and really enjoying company of the rest of the staff away from the field would be a bonus. I was lucky enough to find all of that at Boise State and so when Coach Shults offered me the job, it was an easy decision. As I’ve gotten to know the team and other people at Boise State, I’m constantly reminded that this was the right decision and am excited to get going. It’s an easy program to sell because we are always trying to grow, Boise is a beautiful city with so much to do and great food, and we are competitive with the top programs in the country.

JWOS: From your bio, I noted that you attended law school! Tell me about that – was that a career goal, something that circumstances led to, something that you might revisit in the future?
Strub: I did, for one year. It was something I am glad I tried and would have always had it in the back of my head if I didn’t, but I just missed the game too much. I think in another life it would work out, but I learned that sometimes having an interest in something doesn’t mean you leave your other interests to switch gears and pursue it. I learned a lot in that year and enjoyed it, but knew that I was meant to be on a softball field, so it was more of wanting to be in the softball world than not wanting to be a lawyer. Like I said, I liked the coursework, and am interested in continuing to learn about the law and follow current events, but for now I think that interest will stay more informal. When the opportunity came up, it seemed too good to pass by and in hindsight, I overlooked some red flags that should have given me more pause. I try to always find things to take away from experiences and certainly did with that year because perspective is often a great teacher so I do think it made me a better coach, but it is an interest that stays more informal.

JWOS: Describe your coaching style. What do you see as your biggest strengths as a coach?
Strub: I’m a big teacher. I think as coaches, our job is to develop players and that means making our strengths repeatable and our weaknesses minimal, whether you are throwing, hitting, etc. I’m not looking for a cookie cutter look; there are a few foundational pieces you will see in all great players, but different athletes get to them different ways. So being able to understand where we want to get to and teach in a way that the athlete understands and takes ownership of is how you can be adaptable and be able to repeat those skills across different situations. When an athlete can then understand the plan and take one skill and be able to apply it to another situation, she is putting herself in a great spot. There are so many ‘games within the game’ that I really enjoy so I’m always trying to learn and pay attention and that serves me well in coaching because to be a good teacher, you have to really understand where you want to go and how to get there.

JWOS: If we’re having this conversation one year from now, what do you want to see happen in your first year at Boise State that would let you sit back and say ‘this has been a successful year’?
Strub: Finding success will be the byproduct of a great process, so in a year I’d like to be able to talk about how we worked with intent and purpose every day, the discipline we showed, how we were resilient when faced with adversity, and the effort we consistently gave. If we can tell that story, I think there a good chance we can also be talking about a Mountain West title.