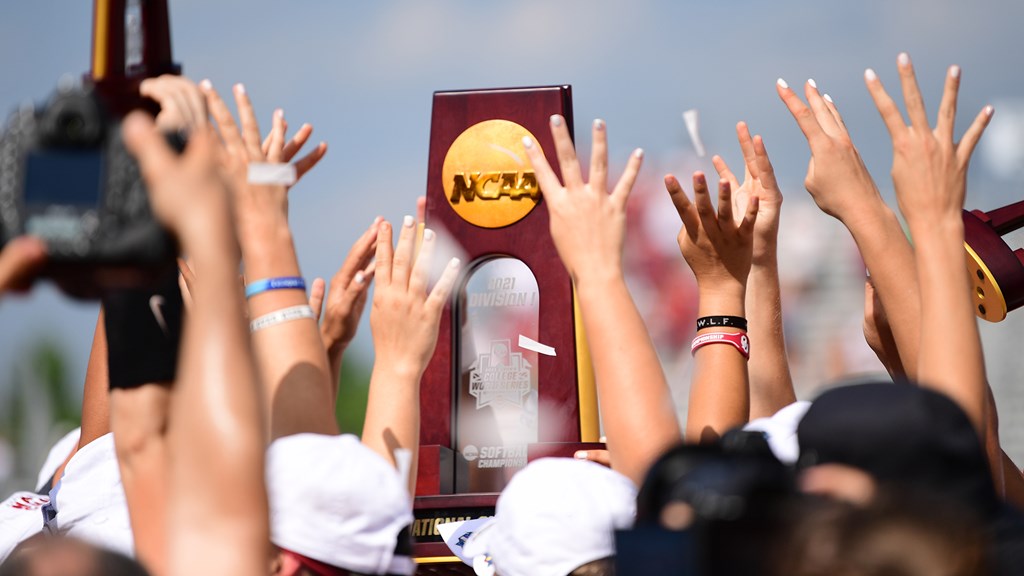 If head-to-head TV numbers operated under softball rules, then it would be a run-rule victory for the Women’s College World Series over the Men’s CWS.

The 2021 WCWS averaged 1.2 million viewers, which easily topped that men’s counterpart, which gathered 755,000 viewers on average.

This marks the third time since 2015 that the Women’s College World Series has outdrawn the CWS in terms of TV viewership in the Championship Series.

In 2015, the Michigan/Florida WCWS championship matchup averaged 1.85 million viewers, more than 400,000 more than the CWS that same year. In 2016, Auburn and Oklahoma’s face-off bested the Coastal Carolina/Arizona MCWS series by the same margin.

Only once since then has baseball beaten softball in that metric when both series’ played the same number of games (2017; baseball averaged higher viewership in both 2018 and ’19 when the MCWS went to a winner-take-all game three and the WCWS champion was determined in two games).

Some direct numbers that show just how dominant the WCWS was over the MCWS in 2021:

Baseball’s most-watched game of the CWS was Game 3 of the Mississippi State/Vanderbilt championship series, which draw 1.67 million viewers. That number was less than both Game 1 (1.86 million) and Game 2 (2.08 million) of the Oklahoma/Florida State championship series at the WCWS, and narrowly edged out Game 3 of OU/FSU which began at 3 pm Eastern time and drew an audience of 1.565 million.

Now, the folks who are baseball fans have pointed out the fact that 2 of the 3 Championship Series games in the MCWS aired on ESPN2, and that the Men’s College World Series had a number of games that aired on ESPN2, as well as stiff competition from the NBA Playoffs and the Stanley Cup playoffs. But neither argument holds water, as softball goes up against the same events annually in a normal year. In fact, the Women’s College World Series typically goes up against the NBA Finals in primetime, which draw more viewers than the conference finals that the MCWS went up against. Softball continually pulls high ratings against those events, however, while baseball struggled.

The MCWS has benefitted in normal years from not having competition on the airwaves; we learned that this year if anything. Individuals in college baseball have been talking about pushing the season back and possibly hosting the MCWS in July to help generate revenue. It likely helps with TV viewers, as well. But the same could also be said if softball did similarly – maybe that is something to think about for both sports.

One thing that cannot be denied: Softball staunchly avoided something that many sports, including baseball, could not avoid: A decline in television viewership.

Softball suffered no such effects, and has firmly and officially established itself as a Top-4 college sport and a major TV draw.